17 days to go till Sundown Marathon 2009. It's time to reveal my shoe of choice, the Saucony Grid Fastwitch 3. It hasn't seen the light since the Penang Bridge International Marathon 2008 and has been stuffed with those brown paper (to keep the shoe in shape) and "hibernating" in the shoe cabinet since then. Almost a year since its purchase, the 100KM has yet been breach. Reason was simple. I totally like this shoe a lot and haven't have the heart to wear it as its outsole can't take much punishment. Call it compassion but one thing for sure is that I know if that I do wear it for races, the shoe won't be here to accompany me to Changi Village this month end. So out comes the shoe from the cabinet now and into my feet for a few runs before the big day. 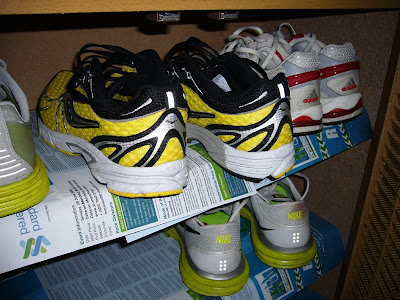 The Saucony Grid Fastwitch 3 I have currently is the first ever batch released that came in a fierce bright yellow and a little black colour. Almost a year now, its colour has since been replaced by black and lime green, and a new white plus lime green colour is on the horizon. I only ran in 2 races with it being the Mizuno Wave Run 2008 and the earlier mentioned Penang Bridge International Marathon 2008 which I ran my current personal best in it.

So why this shoe? Reason was simple. Comfort. My current arsenal of long distance running shoe is down to my 2 racers being the Saucony Grid Fastwitch 3 and the Nike LunaRacer+. The latter though offer superior cushioning, is kind of tight as I bought half a size too small. Besides, the ventilation of the shoe is poor. Not wanting my foot to suffocate in the middle of the night, the awesome ventilation of the Fastwitch 3 will help here with it's large meshes and not forgetting holes on the outsole too.

One main concern I have about the Fastwitch 3 is it's cushioning. Pretty comfortable for a marathon distance, but how will it fare for 84KM? It's a low profile shoe and I almost can feel the ground with it. Therefore, I have taken an extra insole and inserted it into the shoe which should be able to soften and cushion my every pounding. So yeah with this, I need to run a few times in it to get use to the feeling. Therefore, it's time for the witch's awakening...

* Here's a little update on my migraine condition. Still experiencing small and short little attacks but they are manageable. No painkillers has been taken for more than 48 hours now. However, I'm still heavy on Neurobions which led to a few sleepless nights. Otherwise, I think things are looking pretty fine.

I didn't know there are so much to learn about running shoes.....

How I wish if sales person at every shoes outlet has indepth knowledge of their product.....

I had dissapointing experience recently when visited a few sports shoes boutiques and they know nothing about recommending the right shoes for the right person.....

how do u keep ur shoe so well?

i know new shoes can be kept in the box and remain pristine for long time, but once used, its better to use them regularly...at least once biweekly or the shoe degenerates on its own.

Henry: Indeed there's a lot of stuff to know about when it comes to choosing the correct shoes. Once you know it, it's a never ending process, just like the IT world.

marvinct: 6 months of non-usage is still pretty acceptable as long the shoe is kept in a cool dry place. I have silica gels inside my shoe cabinet to help combate moisture. And also, stuff some old newspaper or brown paper in the shoes so that it will stay in shape.