Hear my plea! Please join the Terry Fox Run 2007! Run in the name for cancer research. Let us continue the Marathon of Hope where Terry Fox left his legacy in. Here's a little something on the run.

The Terry Fox Run is a non-competitive event for the whole family, with a large number of participants under the age of 10 and over the age of 50. Two routes are being planned, one for fun-runners and another for experienced runners. Cyclists and roller-bladers are welcome.

Just pre-register yourself in the website so that the organiser are able to estimate the number of t-shirts needed to be printed. The run is free for all, although you are encouraged to spend a little cash to purchase the t-shirt (price yet to be announced). Hope to see all of you there! 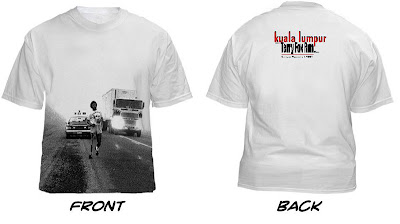 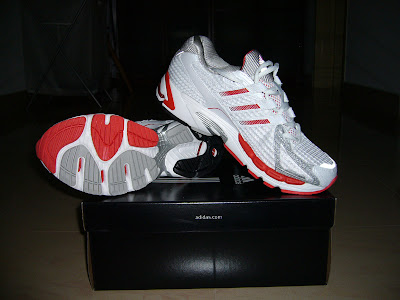 The adidas Supernova Cushion 6 is categorised under the cushioning category suitable for those with high arch and also supinators, and it falls under the training and competition range. At 337 grams, it felt light compared to others that falls in the same category mainly thanks to the new softer and highly breathable upper mesh with fewer overlays thus enhancing air flow. Despite having plenty of mesh all around the shoe, no stitching was done. The noseam technology by adidas allows various parts of the shoe to be welded together thus eliminating any sort of irritation caused by stitching. Another thing included which I really like it is the Ortholite sockliner which helps prevent moisture buildup and therefore, odour and bacteria are kept at bay.

During the earlier days, adidas shoes were pretty narrow in fit. However, that seems to have been improved here in the adidas Supernova Cushion 6. Although still offering a normal width, adidas has made the shoe slightly wider especially at the toebox section. And with a great new fitting, the shoe has also improved on it's flexibility.

The highlight of this shoe is probably the FORMOTION technology on the heel area of the outsole that worked together with adiPRENE. With FORMOTION, the heel area is totally decoupled to further enhance cushioning and stability. To me, it really felt good as it managed to adapt to the ground surface with every heel strike I made.

Downside of the shoes will probably be that it could have been lighter. Don't be mistaken though, the shoe's already light. Also another thing to consider about is to include the option to choose the shoe's width. Shoe's width which are just as important as length tend to be omitted by major shoe maker. I hope adidas can include this in their future models. In my maiden 42KM marathon, the Supernova Cushion 6 gave me no problems at all. However, during my 21KM Penang Bridge Marathon 2007, somehow my plantar started to hurt just after running 5KM. No idea on the cause of it, but as time moves on, the shoe gave me no problems at all.

Overall, the adidas Supernova Cushion 6 is a very good shoe and I'm proud to have it as my first. Even after 9 months of training and competition, the shoe is still pretty much still "alive" although it's life span is coming to an end soon. The shoe is now out of season already although they can still be purchased at a few places at a retail price if RM369.

The Mizuno Wave Run 2007 organised by Pacesetters Athletic Club Malaysia with title sponsors Mizuno was successfully held with minimal glitches. Representing Runnerz was R1 Frank, R2 Andy and new recruit R7 Robert. R4 Ija who registered but couldn't take part due to health issues was there too to support. We need more people like her! The run which took runners into greens of Bukit Tungku was certainly a run for all ages. It was easy on our lungs as oxygen from the greens was all over the route. The only tough part was the double uphill!

The reporting station was improved over the New Balance Pacesetters 15KM run as there were more this time and the person in-charge is no longer hiding behind the trees. Hehe... And the usual Pacesetters way, runners were seperated into segments at the starting line based on the estimated finishing time. We took the second segment which was above 45 minutes. This was an effective way to prevent slower runners blocking the faster runners.

The run started at 7.30am. The first 500M was flat but soon later came the first hill climb. It wasn't a very steep uphill and most runners are still fresh. As runners entered Bukit Tungku, we were greeted by the morning fresh air which went so well with our lungs. Reaching the 4KM mark, a lady runner fell a few steps away from me. I could hear the sliding sound as she fell. I stop and wanted to help her but friendly runners around too help her up. I continued my run after seeing her back on her legs running. Salute to her for continuing the run despite bleeding from the knees. Next came the refreshment station. Took my PowerBar Gel here and took 3 cups of water. There was a slight hiccup at the refreshement station though. Cups were there but wasn't fill up with water. And there wasn't enough people to hand it out to the runners. This slowed me down as I waited for water. Next got ready for the steep uphill climb. A left turn after the refreshment station will test the strength and mentality of each runners. The way up is long and steep! To make things worst, after descending from it, came yet another uphill. I never stop running and just carried on although a little off pace.

As we exited Bukit Tungku, we made our way to National Monument area. There were less trees here but the air quality was still pretty acceptable. And as we entered Persiaran Sultan Salahuddin, we were greeted by the third and last uphill climb. It was a short one but most of the runners were already tired. I was still OK, so I went for it. And as I reached the National Monument entrance, I knew the end was near. I up my pace and began to empty my tank. And when I saw the last 500M marker, this was where my final boost came in. As I reached the finish line, I was shocked to see a long queue. The organisers were a little slow taking the runners number down. And while I was not paying attention, an uncle jump queue. He took 1 place of me! I was suppose to be 381, but ended up 382. :( But I didn't sound him as the run wasn't about me outrunning others. So at the end, I clock 00:59:30. Luckily I didn't go beyond 60 minutes if not I will have bang my head on the wall. 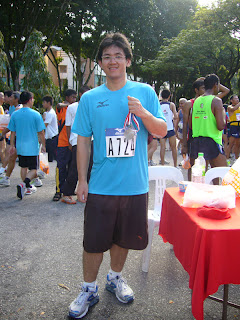 Robert proud of his achievement... 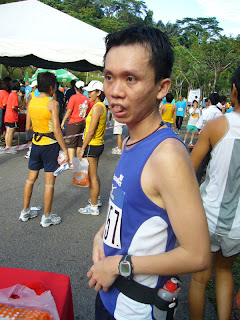 Frank with his "pancit" look... 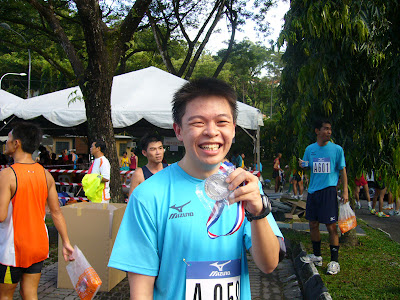 Andy posing with his prize... 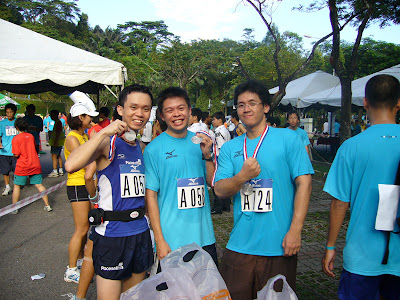 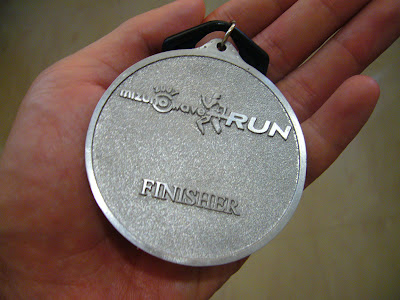 Basic Principles To Train For A Marathon...

Principles to train for a marathon (extracted and modified from Runner's World).

1. Run just enough
Staying healthy is the most important training advice and the most often ignored. It does you no good to train hard, and then get sick or injured. So remember to train smart and not hard.

2. Build your training slowly
Increase weekly mileage by just 10% per week. Extend long runs by just 1KM at a time up to 16KM, then by 3KM at a time if you want. Take recovery weeks as well as recovery days.

3. Recover
Train smart 3 or 4 alternate days a week, allowing the days in between for you to recover.

4. Do your long runs
The newer you are to marathon, and the slower the more important your long runs. You simply have to get accustomed to being on your feet for 3 or more hours. There are no magic length. Experts recommend stopping at 2.5 to 3 hours, however going farther includes walk breaks.

5. Practice marathon pace
A recommended key is the addition of "Progressive Marathon-Pace" (MP) long runs into your program. Do a 3KM warm-up, then 10KM at MP +40 seconds, 6 more at MP +20 seconds and a final MP.

6. Extend your tempo-run distance
Gradually extend your tempo runs, slowing by a few seconds per mile from your 6KM pace. The longer the tempo run workout you can substain, the greater the dividens down the road.

7. Eat your carbs
To stay healthy and recover well, you need to fuel your body efficiently. First, consume some carbs (sports drink, gel, etc...) during long hard workouts. Second eat/drink a good amount of carbs as quickly as possible after workouts. This will replenish the glycogen in your depleted muscles. Add a little protein for muscle repair.

9. Sidestep injuries
Rest for several days a week at the first hint of a problem. Include core training during that as it helps runners maintain good running form and pace late in a race.

10. Taper for 2 to 3 weeks
Most runners hate to taper. Research shows a particulate gain in Type IIa muscle fiber strength, the so called fast aerobic muscles that can adapt to improve performance after a 3 weeks taper.
Posted by Frank Chong at 11:05 PM No comments:

Welcome to my site Runnerz Circle, also known as Runnerz in short. In here, I disagree that running is a sports but instead I call it a Passion. The passion to keep running, to keep pushing and not to stop till we reach our destination. And always remember that the only element that can stop us from doing that, is ourselves. My aim's is to promote running. And I have the following values to guide me through achieving my goals.

MOTTO
"Running for a better tomorrow."

VISION
"To be a successful runner and also to promote running to each and every individuals."

MISSION
"Via a network of friends and families, to train myself and individuals in becoming successful runners through research, developement and knowledge sharing."
Posted by Frank Chong at 11:02 PM No comments: