I ran a surprisingly well Kuching Marathon last year and that was the start of my sub 4 hat-trick last year. It also started the ball rolling for my Comrades qualifier. Therefore, I wanted to do well again this year as the race course is fast one and initially was the only* marathon I had in my running calendar this year.

Despite losing my fitness due to under training since returning home from Comrades this year due to commitments, I still kept my hopes high although I've been feeling down the past 2 weeks. But when news broke from the Comrades Marathon 2016 campaign launch a few days before this race that qualification period has been moved, starting 30 August 2015 to 2 May 2016 meaning I can't use Kuching Marathon as a qualifier anymore, I generally instantly lost the interest or run it anymore. Therefore, I downgraded by plan to take it as a long run and to gauge my fitness level.

I flew for the first time on board Malindo Air and was impressed with it despite a delay of 30 minutes. Was supposed to fly with Roy but as he had commitments, he did not make the trip. But after some adjustments, I had Zijill where I picked her up early in the morning and drove to KLIA2 for our flight at 7AM. We also bumped into Cham at the boarding gate and that was the start of this trio's adventure to Kuching.

We arrived at Kuching at about 9AM and made our way to Merdeka Palace Hotel via a smooth taxi ride. As check-in time was at 2PM, we left our luggage at the lobby before heading out in search for some snacks and eventually found a very nice and friendly coffee shop call Black Bean Coffee in Chinatown. We each ordered our preferred coffee brewed from Sarawak coffee beans and certainly did not disappoint. Met some friends like Elvin, Avis, Bernard and Wai Kuan here too before we made our way to Plaza Merdeka as Cham needed to collect her race pack. Bumped into other friends here like Tey, Ken, Alvin and Barkley before we returned to the hotel to check into our rooms. 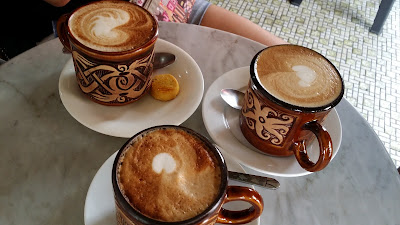 To my horror, despite stating that I wanted 2 single beds, the hotel allocated a room with a queen bed. I raised my concern to the manager Rudy but only got a reply saying the hotel is fully book. Not only that, being a manager, I did not get an appropriate service quality from him which disgusted me after praising them during my last year's visit. And even before the run gets underway, my blood pressure was already boiling. Roy then forwarded me the e-mail again and it was clearly stated the type of bed we wanted and I returned to to the reception to voice my dissatisfaction. And eventually, Rudy decided to do the change only to allocate the duty to another staff. Guess he did not want to serve me as I saw he mentioned some words in some native language. So remember the name of the manager here, it's RUDY!

I needed to wait for the new room as it was not ready and hence waited for a while before moving into Cham's room to chill. Room was ready an hour later but horror again, no bath towel and we needed to wait 2 hours before it is ready from the laundry. Guess this hotel can't cope when it's fully book. And even so, only 2 out of 5 of wall plugs are not working! Sigh...

Dinner was early at 6PM and simple at Secret Recipe where I had soba before returning to the room to find fresh bath towels to clean up before trying to sleep at 8PM. I was glad I managed to and woke up at 1AM later. Despite only 5 hours, it was a quality sleep and I felt recharged as initially I fear  would not have enough sleep time as 2 hours was only what I had the night before. Black coffee, Hammer Nutrition Bar and Gardenia Twiggies was what I had for breakfast or was it supper?

Everything went well at eventually made ourselves to the lobby at 2.30AM to meet up with Cham. Crowd was good at about 1,600 runners for the marathon category. The 3 of us lined up at the back of the pack and when the gun went off at 3AM, it took us about 1.5 minutes to cross the start gantry. Not in a hurry so it was fine as I slowly get into my running rhythm. Roads were of 2 lanes so it was manageable passing some slower runners as we exited the city into the village areas.

Like the year before, it was a little dark in the village area and what disappointed me this time round was the lack of cheers from the villagers especially the kids. Guess they have seen pretty much of it from last year. With small sips of water from the bottle I was carrying at every 3KM, I tried to maintain my pace at 6 minutes per Kilometer and eventually arrived at the 10KM mark in 58 minutes still feeling good.

And just when I started to get into the mood to run with some very mild rolling bumps along the way, my right hip flexor started to retaliate. It hurt with every step and despite manageable, it made me run funny. Guess it needs some WD40 for signs of aging is certainly coming.

Big roundabouts started appearing and that is when I spotted a familiar back. It was Dr. Wong as we ran together till the half point where I clocked 2:04 hours. Still a pretty decent timing and here is where my thoughts came where I can perhaps try to maintain the pace and go for a 4.12 hours finish. That will be a decent time I thought.

It was long lonely stretch here and I needed to keep the momentum going. Unlike last year where I had Lai Ling and Jessica in the picture, I was alone here. I kept moving though I realised soon that my pace is slowly dropping. I pop in half a tablet of Perpeteum Solids hoping it will help a little. And like last year, the urge to pee came at the end of the stretch as I ran a little faster remembering there was a portable toilet ahead at the 27KM mark. But it wasn't there this year as I head behind to tree to relieve myself instead.

A little tough to resume my run after the short stop, I was soon losing it too. Despite arriving at the 30KM mark in 3:01 hours, I know it was going to be tough ahead. I passed Poh Chye here who was struggling himself. In fact, most runners were already walking here. As for me, I did not but instead tried to cruise myself into a higher cadence. Unfortunately, that didn't work and I eventually gave up on completing the run in 4:12 and eventually reduce to walking at the 34KM onwards.

Barkley and Bryan caught up and we chatted a little before I continued running. I asked Barkley if she saw Zijill but he had no idea where she was. I then spotted Dr. Wong and waited for him too as we ran together. I generally walk when he does, and resume running when he did. My quads were hurting more now but I know the finish line is just another 5KM to go as we began to enter the city area where the traffic had started to build. But not forgetting the short but steep climb at the final 3KM.

Conquered the climb successfully and soon spotted a familiar runner passing me. And finally like Comrades Marathon this year, Zijill caught up. I thought she did not see me and hence quietly ran behind her. But soon, she saw me, or at least my shoe as we then ran together with Dr. Wong too.

The final 2KM is a traffic mess. With heavy traffic and almost no road closure, we runners had to zig zag through the hordes of vehicles. Indeed a shame to the organisers as I thought this area will be improve after the same happened last year.

Eventually, we got ourselves to the final stretch and upon turning left at the last bend, we finally saw the finish gantry and cross it in 4:23:20. And to my surprise, all 3 of us came in the top 200 (myself 189) and was rewarded a special finisher tee. 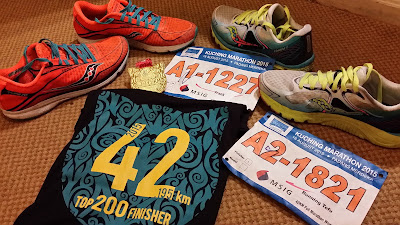 Overall, pretty happy with where I am now. Glad that not much cardiovascular fitness has deteriorated but still much work left to do for strength.. And also glad to have completed another run together with Zijill where we dedicated it to our very dear friend at Saucony Malaysia. 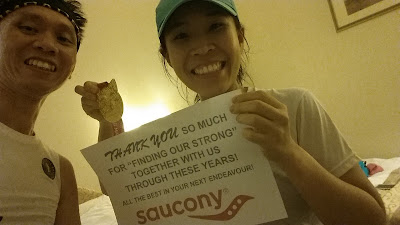 Thank you to our dear friend.

We maximised our room and rested only to check out at 12PM leaving our luggage at the lobby. We then went in search for lunch back at Chinatown again. This time, no food restriction as I had a very yummy Sarawak Laksa before walking along the final Kilometer of the race course in search of a coffee place call Bing Cafe. We eventually found it and spent our time there before returning to the hotel to grab our luggage to head to the airport for our flight was at 6.35PM which got delayed again for 30 minutes. Nevertheless, it was great trip with Cham and Zijill where we not only ran, but of course chatted and gossiped, and not forgetting an exchange on our Comrades experience. 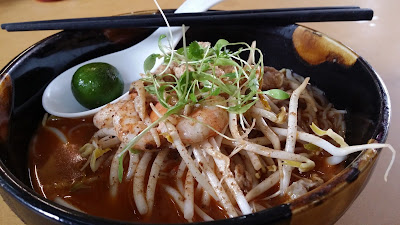 * I was worry I did not have any more marathons to this year to be use as a Comrades qualifier. But I was lucky enough that a Plan B came into view just a few days before the Kuching Marathon. And now I have about 2 months plus to train for it. It will be another fast course and it will be a IAAF Gold Label Race once again and that I will make good use of it. That will be my focus now.
Posted by Frank Chong at 6:00 PM No comments: