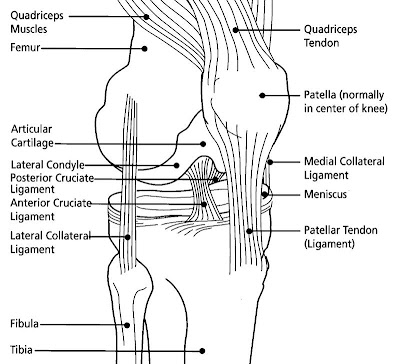 There have been a lot of questions regarding whether does running contributes to knee problems. Therefore, here are some information regarding about our knees, extracted and modified from Runner's World.

Osteoarthritis (OA), the most common form of arthritis, occurs when cartilage, the spongy tissue that cushions our joints breaks down and deteriorates, making weight-bearing activities painful. From there, many people believe that running accelerates this process. And while most of us credit our running for keeping our heart, lungs and soul healthy and happy, a twinge in an ankle or stiffness in a knee makes us wonder if our nonrunning buddies are right and our joints are bearing an unreasonable burden.

The number one risk factor of OA is excess body fat - a problem most runners don't have. Sedentary, overweight people are 45% more likely to develop OA than those who are active. The more we weigh, the more pressure is palced on the joints, which seems to accelerate the breakdown of cartilage. Since losing weight is one of the best ways to prevent OA (losing 10 pounds can take about 45 pounds of pressure off the knee), and running is one of the most effective calorie burners, hopping on the treadmill for a tempo session could help you sidestep joint issues.

But running does more than just lighten the body's load. Aerobic exercise improves most body functions - including joint health. When we exercise, the cartilage in the hips, knees and ankles compresses and expands. This draws in oxygen and lushes out waste products, nourishing and keeping the cartilage healthy. Without it, cartilage cells get weak and sick. Furthermore, running strengthens the ligaments that help support joints, making them more stable and less susceptible to sprains and strains, which can damage cartilage and eventually lead to OA.

Patellofemoral pain, or "Runner's knee", may be the top reason runners get sidelined. The anterior cruciate ligamend (ACL) is the most notorious of the four fibrous bands that stabilize the knee. But for runners, the medial collateral ligament (MCL) and the lateral collateral ligament (LCL) are more prone to injury because they tend to get overstretched, especially if one slips or fall. The first sign of MCL or LCL sprain is pain and swelling. Bruising usually occurs one or two days later. In more severe cases, sufferers complain that the knee feels as if it may give out. In any case of discomfort, refer to a sports-medicine specialist.
Posted by Frank Chong at 12:22 AM No comments:

Pre-race day
Arrived at Singapore in the wee hours of 5am and proceeded on to The New 7th Storey Hotel to rest after breakfast. Had a short nap at the common area before proceeding to Suntec International Convention Centre to collect the Race Entry Pack. A very good job from the organizers as the collection was so well organized. However, things started to turn here as my body began to lose its battle with the fever I had been having for the past 3 days. Started to pop in Panadols every 4 hours. And by evening, I totally lost my voice. After an early dinner, I had an early rest at 8.30pm but just couldn’t do so due to loud snoring from William. 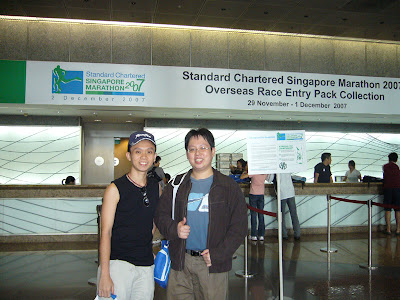 Race day
Woke up at 2.30am and feeling a bit heavy on the head. Insufficient rest, fever and total lost of voice. Took my first energy bar, the Cliff Bar before taking yet another Panadol with my breakfast. Showered, got ready and at 4am, I took my second energy bar, this time PowerBar Performance banana. And at 4.30am, together with Andy and William we made our way to the starting venue.

It was crowded with runners. My mind is going crazy here. At 5am, I took my first PowerBar Gel as I made my way to the starting point at the Esplanade Bridge. Visited the toilet once before checking into the starting pent. I checked myself in the sub 6 hours pent and it was like 50m away from the starting mat. The music was playing out loud and I was nervous. I tried to calm myself down and just a few minutes away from the start, the urge to visit the toilet came again. I held on to it as it was already too late. I look up to the sky as the strong wind blows over all the runners. I told myself here that I did not come here to lose. I set myself a target time of 5 hours 15 minutes, a realistic target based on my training. And at 5.34am, the full marathon was flagged off. It took me about 4 minutes to get to the starting mat and off my ChampionChip went, “BEEP”. The battle has begun. The band and cheerleaders call Runspiration was cheering all the runners for a stretch of like 300m. I felt energised from their cheering as I started extremely well with nobody around me and I managed to keep a steady straight pace.

From Esplanade Bridge, I ran into the city shortly before making my way to Marina Bay. Motivational signage was everywhere. Passed the first check mat at the 8KM mark and my ChampionChip went “BEEP” again. On the way out from the bay at the 9KM mark, I took my second PowerBar Gel. Felt energised again as I made my way back into the city. The Runspiration team once again appeared. They were cheering and playing very inspirational music and somehow, I got my surge of energy here. I passed by again the starting point which was now crowded by the 10KM runners. Everyone was cheering for the full marathon runners. At this time, my pace has been increased and my heart rate was nearing 85%. The real battle came here as the sun began to rise. I told myself that I must brave the heat no matter the cost as I took a cup of Elite drink. I thought it was 100Plus but it taste so different. So refreshing.

As I exited the city and ran myself into the East Coast Park, I lowered down my pace and maintained my heart rate at 80%. I was greeted by the salty air here and I was glad that there were plenty of trees here shading me from the sun. I was also greeted by the Runspiration team again but this time together with many other people around the park spending their weekends there. They cheered and cheered and I felt like I was the King of the Road at the moment. At the 18KM mark, I took my third PowerBar Gel before I decided to visit the mobile toilet at the 20KM mark. Yes, I held on for 20KM before I finally decide to let it go. 30 seconds of time wasted here as I continued my run. The run here at the East Coast Park is quite mentally challenging as it was a long route to the end before making a U-turn back. Passed the second check mat around the 21KM mark before the third at the U-turn at the 27KM mark. “BEEP”! The satisfaction as I made my way back. Shortly later, came the PowerBar station as I grabbed myself a PowerBar Gel and downed it. Muscle fatigue started to kick in here as I can feel my rear left knee hurting. However, I kept reminding myself that it isn’t the time to stop yet. I run myself till the 33KM mark before taking a short breather for the first time. This was my longest non-stop run ever. Took a walk for 30 seconds before resuming my run as I exited the park.

On my way around the Kallang River area now. My legs are already aching badly but I kept pushing. Some words that came from me to remind myself, “My ligaments are strong, My muscles aren’t to the limit yet, I do not want to regret later”. At the 35KM mark, I took my fifth PowerBar Gel, the green apple with 1X caffeine for the extra boost I need. I passed the National Stadium and quickly acknowledge that it isn’t very far now. My target time is within reach. I ran and ran thinking positive. And at the 39KM mark, that was it. My final PowerBar Gel, the double latte flavour with 2X caffeine. Downed it and immediately after I felt it’s presence in my body, I up my pace. People were cheering loudly now as I know it isn’t far now. I know I’m on my way home. At 40KM, a Saint John Ambulance cadet gave me a high-five and that totally boosted my morale. As I made my way into the final 1KM, this was it. My fastest pace with my highest heart rate of the race. As I turned into the last corner, I was greeted by thousands of people cheering. I kept my composure as I raised my hand, look up the sky and for one final time, my ChampionChip sounded "BEEP" as I crossed the finish line at 05:12:00 (gun time - 05:16:06), my new personal best, 38 minutes 10 seconds shaved off my previous best timing! Here's my RunPix analysis. 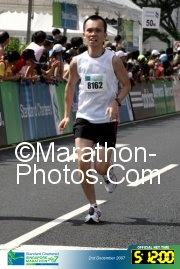 Racing towards the finish line...

Tears of joy and satisfaction as I stood victorious in the finishers pent while doing my warm down and stretching. Took out my ChampionChip in exchange for my Finisher’s Medal and T-shirt. Both of them were very nicely designed. I quickly looked around me, seeing the both the happy faces as runners were all walking around taking pictures and some laying down on the grass resting. To me, it was a great ending to a wonderful event. The best I ever had thus far! And I’m so proud that even though I’m not at 100%, down with fever and total lost of voice, I managed to outdo myself by running more than 5 hours! 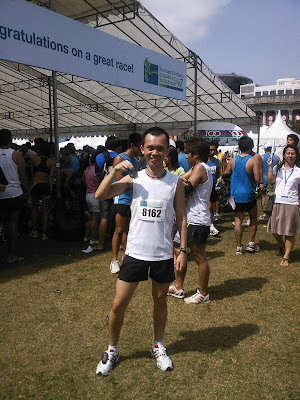 Posing with my prize finisher's medal... 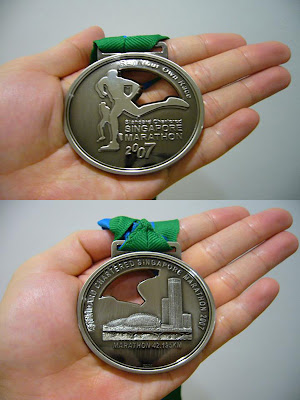 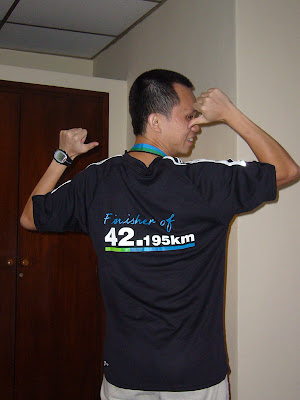 Proud of my achievement...

Congratulations and thank you to all the organizers and people who made the Standard Chartered Singapore Marathon 2007 a reality and a success. Now I know why it is called The Greatest Race on Earth. And finally to all the runners, we all are the champions. We shall see each other again, 7 December 2008.