Of Highlands, Midges and a Goblet...

The West Highland Way Race (WHWR), like the Comrades Marathon holds a special place in my running career. It’s after all the race that defined the first decade of my running career and my also longest trail running experience till then. But more important, it’s my Scottish friends and community that makes this race special. 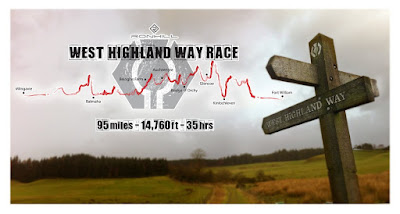 Ran a pretty well deserved race last year despite breaking down towards the last quarter of the race and suffered numerous irritating bites from the damn midges. Never thought that I will be doing it again since travelling, accommodation and logistic expenses costs a bomb. But when the balloting process got underway last year and that I saw my well earned crystal goblet being lonely alone sitting there, I thought it may look better in a pair, and that I would like to challenge myself again to kick start my second decade (kick started at Route 68 though didn’t have the best ending). And when the ballot results got announced, I was successfully chosen and hence I was in.

Training for it like the Comrades Marathon this year didn’t go well. As of this entry, I only had about 555 Miles (888KM - damn lucky) ran between my legs as compared to 1,000 miles the previous year. Comrades will likely give me a benchmark of where I am and running a personal worst of it, I am ready to suffer. There will be concerns though, as I worry the wound on my surgery area before I left for Comrades last month may not hold. It did hold during Comrades though, but the amount of time and stress that I will go through WHWR is twice of it, and that may be an issue. But let's see.

Flight to Edinburgh, Scotland got delayed for a day as I missed my connecting flight at Doha as Qatar Airways had to take an alternative route which added an additional hour of flight time to avoid Saudi Arabia and Dubai’s air space due to the gulf situation there. But in a way, I managed to recharge myself up when they provided me with accommodation at Doha with 3 absolutely well deserved meals. And when I got to Edinburgh and the Aberdeen, I was fresh, well except for the sore legs. 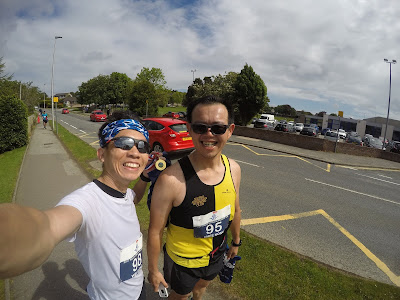 A week in Aberdeen doing almost nothing until the weekend when I ran the Nicol of Skene Westhill 10K where I clock a 50 minutes over a hilly 10KM route. Not a bad time as it has been a while since I race a 10K. I felt good and I guess my recovery from Comrades has gone pretty well. Then it was off to the highlands, a total of 4 nights over at Tyndrum. Covered 100KM around Crianlarich, Inveroran, Ben Lui and the surroundings there testing out my race gears in horrendous wet conditions. Everything worked instantly well except for my race shoe, the ON CloudVenture Peak where I had to adjust the fitting a few times before I finally found a perfect fit. And from there, I took on the highlands with confidence. Legs were good, core was stable, upper body in the right position and my head was clear. I think I am ready again. 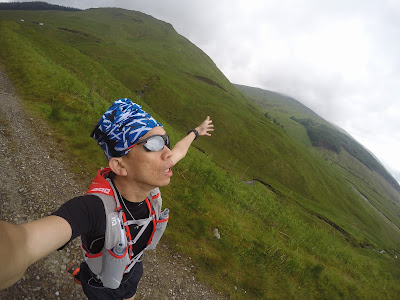 Free and alive while training on the highlands. 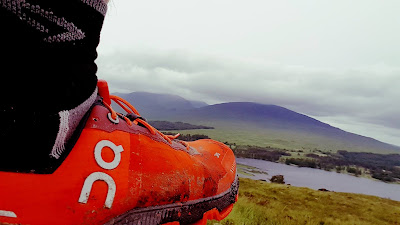 The ON CloudVenture Peak is now ready to take on the highlands.

Always sad to leave Tyndrum for it’s a place that I am away from the noises and distractions. And before I return to Aberdeen, it was a short trip to Glasgow where I had a quick catch-up with Chris who will be running his first WHWR and also Angela who will be part of my team again. Thank you Angela for doing this again! After having done the race last year and knowing what to expect, we had a quick discussion and planning over dinner at Pipers’ Tryst before calling it a night. 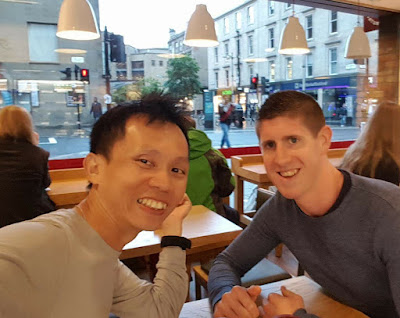 Good catch up with Chris. 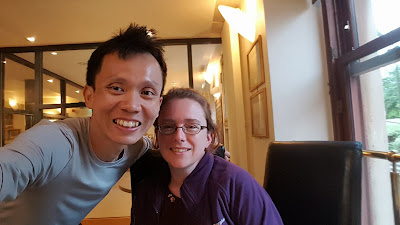 Race planning and catching up with Angela over dinner.

Overslept the next day and didn’t manage to run around Glasgow as I had to catch the train back to Aberdeen. And once in Aberdeen, it’s all about preparing my race gears and resting the body. A little running around the Old Deeside way to keep the legs moving but it’s all about recovering and hence there is plenty of healthy eating before returning to Glasgow on Thursday to rest up there for a night. 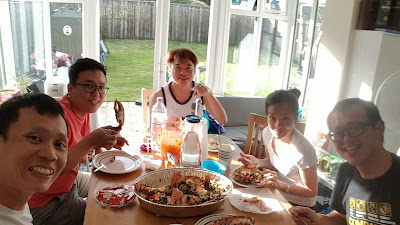 Lobster feast at Aberdeen with the usual gang.

Plan was to get to Milngavie by 9PM Friday where I will register myself and to meet and greet my friends and fellow runners before a little time for myself to chill out before the race gets underway at 1AM (8AM Malaysian time), Saturday, 24 June 2017.

Looking forward to the journey and experience again over the Scottish highlands. Am glad and honoured that I am given the same race number as last year at number 10. Thanks Ian. Should be 11 as this is my 11 year of running after all but it's always nice to stick with a special one. Though Alexa and Edmund won’t be crewing for me this year, I am glad that Angela and Chee Kong are still part of my team. And a warm welcome to Tom Anderson who will be joining this year. Thank you everyone for taking time off for this! And despite me mentioning that I am ready at the above paragraph, I know that it will be tough 152KM and also equally tough for my team. I won’t be expecting to improve on my time as completing the race is the main goal. Struggle I will, but like Comrades this year, I know in my heart that this can be done and it will be an unforgettable journey yet again. To the organisers, volunteers and community, a big shout out to you all. And to all 213 runners, “Let’s go get that Goblet!”.

From last year.
Posted by Frank Chong at 9:10 PM No comments: