This is a much long delayed review of the Saucony Hattori which I owned since October 2012. It's not a new shoe from Saucony and in fact, it has been in the market for the past one year or so. Not only did I not have time to have it reviewed, I needed more time to test it out as the fitting was a little weird upon the first few impression. But since having loving it so much and bashing it out to the max since my not too long ago South Africa Year to Year Circuit Race, I guess it’s about time. Besides, it’s Chinese New Year now and so I took the chance to quickly blog about this. Even so, it took me 2 days! 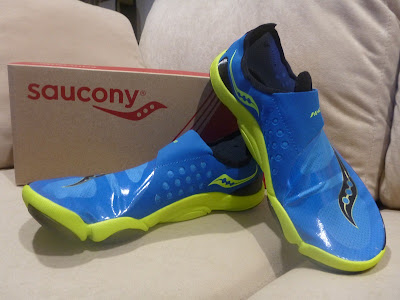 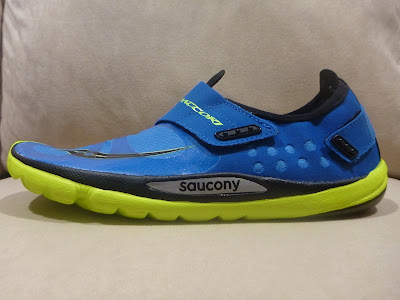 Lateral side of the Saucony Hattori. 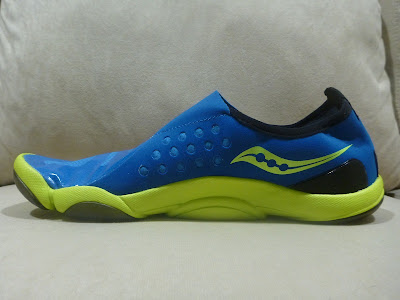 Medial side of the Saucony Hattori.

The Hattori is part of Saucony’s natural series and first entry into the 0mm heel to toe drop segment. Weighting in at about 123 grams at size US8.5, I was a little skeptical about its look when it was first announced. It looks somehow like a platypus feet which may fit a little funny. Some getting used to it will be required and it took me a little time to adjust to it. Putting it on was really tough. The opening was small and once you get your feet in, it gave a secure fit, much too secure I will say. The velcro at the heel tab was just of cosmetic usage and provides no functional use. I thought of releasing some tension around the Achilles area using that and found no use at all. And when I first put it on, I was right. It felt really weird with my toes being splayed to one side. 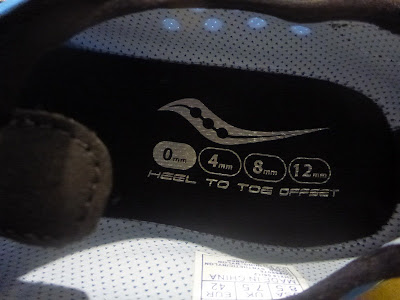 0mm heel to toe differential as indicated on the sockliner.

The upper of the Hattori is made of synthetic mesh with some transparent film covering the forefoot area. I guess these are reinforcement film to prevent any tearing. However, I've still heard of tearing issues which I foresee is due to long toenails or Morten toe issues. I myself have absolutely no issue with this till today. The mesh itself is actually pretty soft and offers seamless construction to it hence coupled with the built-in sockliner, this shoe can be worn sockless. It also offers very good breathability and during my Circuit Race where it rained heavily on the first day, I actually felt that the shoe has some capability in “repelling water”. My leg was soaked ankle deep but the upper stayed almost dry. I am very impressed for sure! A couple of reflective strip on the lateral side and also the heel tab is used for safety under low light conditions. 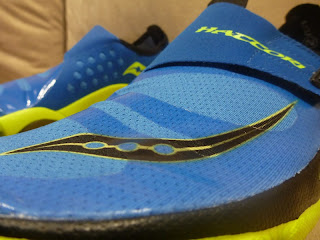 Tiny pods on the upper for excellent breathability. Notice the shiny protective film.

Ground feel however was actually pretty good. Measured at about 13mm stack height, I personally feel that it’s pretty balance between cushion and ground feel. The outsole is built on Saucony’s EVA+ rubber with the heel and medial front near the big toe reinforced with Saucony’s XT900 blown rubber for added durability. On the lateral front side, multiple groove design is used to provide flexibility, cushioning and traction and I must say the design really works, with the exception of picking up small rocks in between. On the medial side instead where the arch is, there is something “egg” shaped which acts like a medial post. Not sure if it is, but it provided some stability to the arch. 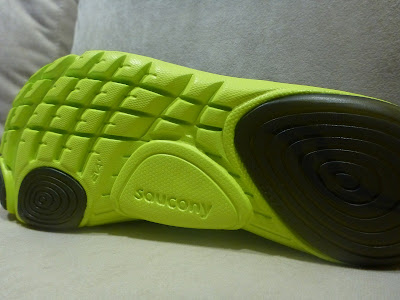 A view of the outsole. Black area is the XT900 blown rubber.
"Egg" shaped medial post with the Saucony word on it and the flex grooves at the forefoot area.

And remember I mentioned that the toes were splayed to the medial side hence the funny fit? I do think there is a reason for it for I do find propelling the next step to be exceptionally well!

I managed a single 70KM plus run on the Hattori during the Circuit Race. I really like the shoe and wanted to go further, but due to my swollen feet and the tightness around my ankle due to the very secure fit I mentioned earlier, I had to change shoes. Therefore, if you were to use this shoe for an ultra distance run, be sure to have it up at least a 1.5 size instead of the regular 1.0. This is mainly due to the tightness of the collar.

Another to mention is the heel tab as I suffered from a few incidents of blisters due to poking on the Achilles heel. To solve this is pretty simple, just put on socks. However, I did not suffer at every wear hence this may be subjective and personal for everyone.

The above 2 are just the issues I had with the otherwise wonderful Hattori. It provided excellent traction, feedback and not to mention “water repelling” attributes. If you want to run simulating barefoot and think that Vibram Five Fingers is too much of a way to go, the Hattori will fit into the bill in offering a barefoot ride with protection. And for the price that you are paying for, it's certainly a BANG for your wallet considering that the outsole is pretty durable.

We have heard that the Saucony Hattori will be discontinued and will be replaced with another 0mm heel to toe drop model soon. So if you really want to have this in your collection, be sure to grab it fast! I myself has gotten myself a second pair.
Posted by Frank Chong at 9:30 PM 1 comment: