I haven't been blogging much lately. In fact, I haven't been myself ever since returning from the Malakoff Interstate Fellowship Ride 2009/2010. I been slacking a lot since then, doing less of my usual everything and day dreaming. Not sure of the reason though. Perhaps I miss my friend, miss my usual training activities, grumpy of getting injured or even from some personal issues I'm facing. I do not know.
It's 3 months till my third ultra marathon, my second 84KM at the Sundown Marathon 2010 and I have yet to start my training. Officially, it has started at the New Balance Pacesetters 30KM 2010 but not in a way that I would like it to be. My injured leg at that time resulted in me walking 16KM back to the finish. However, my recent results at the Putrajaya Night Marathon 2010 hinted to me that I'm still pretty much in the game. Fitness suffered just a little but most important is that the leg is healing at an impressive rate.

So the body can be said to be all set for another tough training session. But how about mental? I pretty much guess that at this point, this is the only thing that is holding me back now. Perhaps I became lazy due to my injury or it can even be that I lost my motivation to continue on. As a Personal Trainer, I'm setting a bad example here. Seriously, something must have happen at this department and I haven't been doing anything about it. Instead, I just let each day goes by unproductively.
This weekend will be the Ironman Langkwai 2010 and I'll be there to give my fellow friends support. In the meantime too, to get away from the usual life and also to pay a visit to Langkawi Island since I never been there. I hope this trip there will be a productive one and perhaps I can absorb some motivation from the gruelling event itself. And then, it will be into March 2010 when a dear friend returns. Hopefully, everything will change then as right now, I'm living life behind a mask as what you see on me doesn't reflect what's inside me.
Posted by Frank Chong at 2:00 PM 2 comments:

The Putrajaya Night Marathon 2010 is Malaysia's first ever night marathon. Not only that, it's also my 10th marathon. I'm sure most of us want to run a good marathon on their 10th. But this isn't the case for me. With zero training and still on route to recovery (almost there), I know I won't be able to run my best, not to mention at my own standards too. Therefore, I'm just taking this run as part of my training run and also to see if this will be my comeback run after laying off for a few weeks.

Had a reasonable sleep over the night, just a little longer than usual as I turned in late. An early dinner with Jeff and his cousin Jordan at Puchong at 4.30pm. It poured pretty heavily on my way there, and I though it's going to be wet race. I brought 3 pairs of shoes with me to choose based on the weather. Hahaha....

A quick dinner, and we left for Putrajaya arriving there at 5.45pm to secure a safe spot to park our car. Had a short visit to the race village before returning to meet up with Choi and some other friends. Even Andrew came to support and to take photos. The sky threaten to open up again but it held on. Having ran at Putrajaya in the night before, I know how humid it can get. But I was glad that this time it was pretty much acceptable and there was a very slight breeze that made things better. Geared up at 7pm and off we went to start area to warm up and to meet up with more friends like Chin Ann, Loke, Keat Seong, Jennifer, Raymond Ng, Michelle and more. Unlike my Macau Marathon 2009, there weren't any tense moments and I felt relax this time. I even had a pretty good time chatting away while waiting for the race to start which it did while we were still busy chatting. Hahaha... 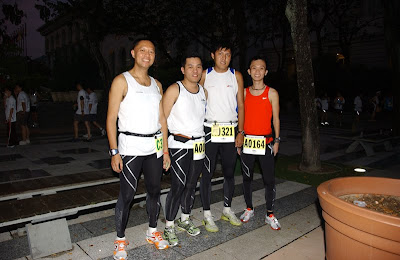 We put our trust on 2XU Compression...

Pooff... Off goes the gun at 8pm sharp and I started from the middle navigating through the runners with pretty much ease due to the wide road. Besides, I was using this to control my early pace. It was after the Seri Gemilang Bridge at where it overlook the Putrajaya International Convention Centre (PICC) which I believe is the 2.5KM mark that I began my race pace. As with my recent New Balance Pacesetter 30KM 2010, I know my legs won't be able to last the distance, hence I intend to go as fast and as long as I can before I start slowing down. Besides, 2 short test runs I had a few days before did not show good results.

As I made my way around PICC, I met Amelia and Judy who were volunteering for the timing chips. Also saw Choi, Loke and Jeff at the opposite side sticking close to each other. Tackled the first climb at PICC with care as I kind of know side stitch will come if I attacked it. No problems with it and off I carried on towards Lebuh Sentosa. Long rolling stretch here as this is where I had my Powerman simulation last year. This is also where I met Sallehan, a Singaporean with a marathon personal best of 3:42 and a sub 10 hour 84KM ultra marathoner! We chatted as we ran together before he broke away at 11KM. Nice chatting, but he was just too fast for me to follow up.

Carried on myself on a lonely road with only a few marathoners running in front and the back of me. Not going to start counting the lamp post here as I was still on good pace. At the 15KM refreshment station, Andrew shouted at me as he was photographing the runners running through. But then, he appeared again at 17.5KM like that he was teleporting around. Hahaha... Nevertheless, thanks a lot! This is also the start of the long stretch along Persiaran Timur and Persiaran Selatan. Soon after, I felt my left knee. I know it's going to let go soon, but still I went for it though I know my pace has slowed down a lot.

21KM at 01:57:46. I'm still able to run a sub 4 hour marathon though I know my chances are very slim as pain slowly creeps in. From here, I told myself just to run the best I can. No shame if I have to walk.

At around the 22.5KM mark, a volunteer who was on roller blades cheered on me and even bladed with me as I ran. I didn't have a good look at him but it was Daniel Lim, store manager from The Bike Boutique as I later found out from Keat Seong. Thanks a lot Daniel and so sorry that I couldn't recognise you in the dark.

25KM mark, Lydia and Kenny did their hoo haa cheering me on. They really made the lonely night so livelier here. Thanks a lot! Soon later, I heard familiar voices. It was Raymond and he was with Keat Seong. They caught up with me and we ran together till the u-turn point which was like 1KM ahead before they started surging away.

28KM is where I had my first stop to stretch. The pain finally got to me. Though I know my legs will start locking up whenever I stop or even walk, I had no choice. It's better to be safe than sorry. I saw my fellow friends like Choi, Loke, Jeff, James, Saya, Yee Hua, Michelle and Jennifer at the opposite side and waved to them. I ran with Chin Cheong for a while here before I decided to let him go. Then it's Lydia and Kenny again screaming from the opposite. Hahaha... Henry and Haza too came in the picture and being cheeky, I shouted to them saying "The night is still young!". Eugene too later came into the view and he was much faster than I expected. Well done! I also bumped into Keven as I guess he has hit the wall here. Told him to jog a little from time to time which he did.

I ask myself how long to go till this killer long stretch ends? I had to stop numerous times to stretch along the way till a St. John Ambulance ambulance came and stop by to ask if I was OK. Told them I was before they carried on with their duties. Thanks anyway.

At the 35KM mark which was the end of the long stretch, Saya caught up with me. I tried to follow her but I tend to lose her every time I get close. No point in doing so if I can't match her pace. And so I carried on, trying to chat with and motivate other runners especially those who were walking.

Finally into the Prime Minister department area and I know it isn't far now. It's about another 2KM from the huge roundabout there till the finish line but I know I had to run one round behind the Palace of Justice to complete it. I ran and walked and when I saw the the final marker which indicated just 1KM to go, I was really happy. But shockingly, it appeared longer than expected. And just before the final turn, I saw Michelle coming from behind. I slowed to wait for her and we ran together hand in hand completing our marathon with a time of 04:44:20. Thanks Michelle for the great finish together. 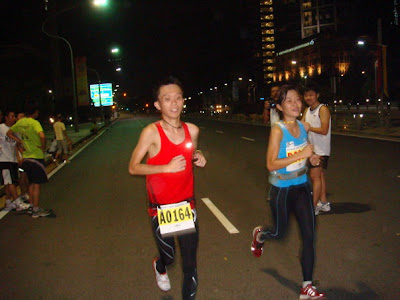 Completing my 10th marathon with Michelle...

Proceeded to collect our finisher's medal and t-shirt before chilling down with the others. Had a great time here sharing our experiences together. All the ladies here won some cash prizes including those from the half marathon categories like Lynn, Chin Chin and Shih Ming. Congratulations to all of them! We hung around till 2am before making our way home though I went for a short trip as I missed the turning and ended up going towards Bangi. Back home, I couldn't get myself to sleep as I over refueled myself with fluid. Hahaha... Only got myself to bed around 5am. 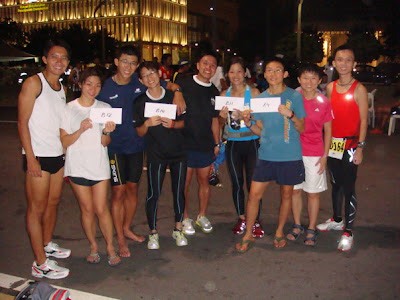 Thanks Ben for bringing along his camera so that this photo is made possible for the memories... 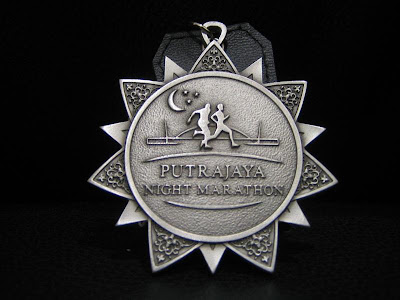 Front view of the finisher's medal... 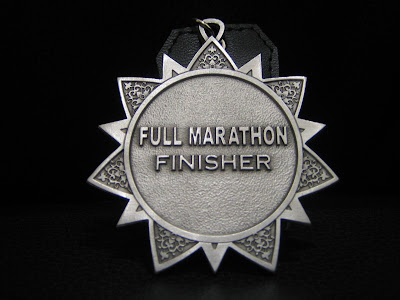 Rear view of the finisher's medal...

All in all, it was good event. The organisation was good for Malaysian standards although there is certainly room for improvements like the ambiance after the race. It felt like a "ghost town" being so quiet. Besides, isotonic drinks and other beverages has ran out which was an upset for marathon runners. But most importantly, sufficient hydration was made available along the way together with good traffic control.

As for me, another marathon in the bag. A decade of marathon and though the time was not a fast one, it wasn't too shabby too considering that I'm still recovering from my left knee injury and that I had zero training leading up to this. I have to say I'm really satisfied here. Life without running for a runner is certainly horrible but with this, I'm glad to announce my come back.