The Royal Malaysian Air Force (RMAF) is celebrating it's 50th year anniversary and in conjunction with it, a half marathon event was held this morning. It was held at the RMAF base at Sungai Besi and the event was a blast! Read on...

Although I only managed 2 hours plus sleep, I woke up feeling really good. After all the preparations, I was ready to leave home. The moment I slip both my feet into my shoes, I felt that I can do something today. My legs felt light and strong after training with heavier shoes. Initially, I thought of just treating the run more like my training run as the Sundown Marathon is just next week. After analysing my situation, I decided to give a little push for this event today. I was targetting a time of 02:15:00, but then after thinking about it, I guess a time of 2 hours will be nice.

And so, I went to Bukit Aman carpark to meet up with Ronnie, Chek, Geraldine and some others as they do not know the way to the venue. Ronnie and Chek followed me in my car while others just tailgated me. It was a convoy of around 5 cars if not mistaken. Arrived at the venue in just a matters of minutes and managed to find a nice parking spot. While finalizing our running gear, I suddenly heard a lady saying that the last bus was about to leave for the starting point. We were all caught by suprised as we though the starting point was within walking distance. Packed everything up and rushed to the bus except for Ronnie who had to visit the toilet. At the starting point, we all gathered together for a group photo before the adventure begins.
. 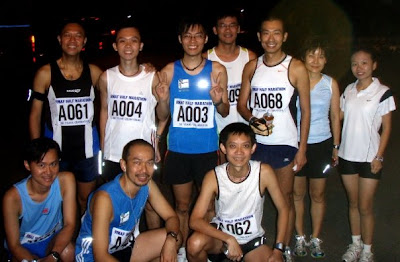 It's always a tradition to have a group photo together before the suffering...

At 6.30am, runners were flagged off. The first 2KM was along the airstrip. It was an unforgetable experience having to run on it. And to make things even more interesting, there were fireworks as runners made their way to the main road. I started at a very comfortable pace following Choi and Jamie. I caught Lim PT busy snapping pictures of the fireworks. Hehehe... There be a lot of interesting pictures from him, I'm sure. And so, at the main road, I let my legs and body do the talking. I plan to do the ever effective negative splits but this time, I did not look at my watch. I just run the way my body is telling me. After 3KM, I caught up with Lai FS. I gave him some encouragement as he looked tired before I took off. From there on, we made our way into KL city via Jalan Imbi before heading towards Jalan Sultan Ismail. I totally enjoyed the run here as it's not always that runners are allowed to run on the streets here. The beginning was a small hill climb which I dealt with it easily. After passing Lot 10, the memories of KLIM07 and 08 came into my mind. The route here all the way to Dataran Merdeka was just meaningful. Approximately around the 9KM mark, Choi caught up with me and I was pacing him all the way till the 10KM mark when it's time for me to break away. This was my plan actually, to run a sub 1 hour for my first 10KM, and then to go faster from there. And I did it! 10KM in around 50 minutes! And the best part was, I was still feeling good. No pain nor fatigue.

At Dataran Merdeka, I was greeted by the guys from PowerBar. Just before reaching them, I shouted to them asking if they had the vanilla flavoured PowerBar Gel. They replied they didn't and so I had no choice but to accept the strawberry banana flavour. Taste pretty OK actually. From here, I ran pass the National Mosque and suffered along the way as there were many vehicles here. I had to look up the sky to avoid breathing in the fumes. I quickly got away from there and soon found myself at Federal Highway, another place which brought back memories of KLIM07 and 08. No problem here and quickly enough I found myself at the Seputeh area heading towards Cheras. It was hilly but then somehow I'm feeling great! Not sure what happened to me today but I just felt so good. I saw Tay Poh Chye and I got a little worried that he may fartlek me should I overtake him. Hahaha... As my gap with him grew closer and closer, I gave him a thumbs up and away I went. Shortly later, I caught up with Ryan who was walking! I cheered on him and asked him to start running but he was just too tired. With nothing I can do, I continued my run and soon found myself next to Smart Tunnel. I can see the RMAF base from here although it's still 3KM away. With it, I decided to do my final push all the way. With the last 1KM to go, I looked at my watch and saw my timing. I was so happy as I was on route for a new personal best! Just before entering the base, Tey ET was there snapping pictures. I slowed down at the finishing area as the finishing line was in the middle of the field and it was filled with little holes. Not wanting to risk a sprain ankle, I tackled it with caution and finally crossed the finish line at position 75, clocking 01:45:18! A new personal best for me! 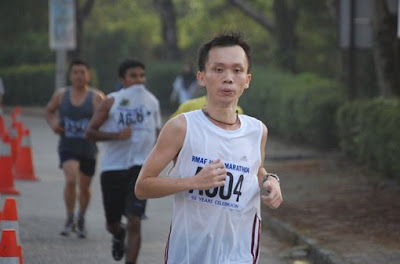 Almost to the end...

I later found out that the race route was under distance. Nevertheless, I enjoyed it. It was a great and well organised event. Distance marker was there, sufficient drinks and traffic control was good. And for me to clock this time even without me going full out, what else can I ask for? It's almost 15 minutes better than what I had aimed for, and even after my run, I was still feeling good! Man... All these is giving me pressure to do good at next week's Sundown Marathon! 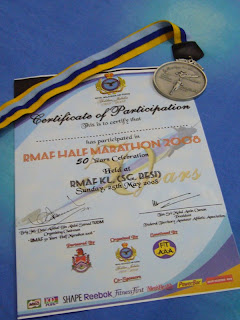 A well deserved certificate of participation and finisher's medal... 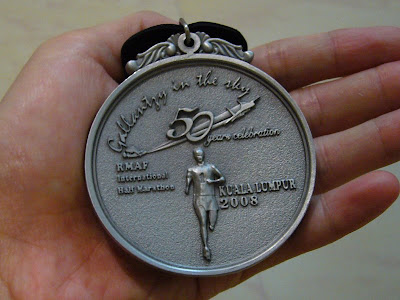 Front of the finisher's medal... 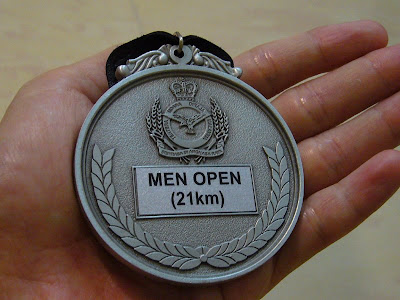 Rear of the finisher's medal...

After congratulating almost everyone, we all went back to the car park to get changed before proceeding to the muzeum to have some pictures taken together with the planes. I shall let the pictures do the talking from here onwards. But before ending this report, I would like to congratulate the organisers for a job well done! And to Ronnie and Choi, thanks once again in believing in my ability to push myself to greater heights. You guys believe it more than I believe in myself! And so with this, it all comes down to next week's great 42KM!

all the best in your next 42km.

Thanks. This blog here is only intended for running. The other is my personal blog which I do not disclose it. I blog about my life there although there are simple entries on my runs. Just plan out on what to blog and it will be easy.