The evolution of a product does not necessary mean major tweaks or a total overhaul to it. And when it comes to running shoes, I’ve noticed over the years that 2 generations will normally share almost the same DNA with only some very minor tweaks done to it before something more drastic is done over the next. The Saucony Kinvara is one of this good example. Into its 6 generation now, the shape, the last and the feel of the shoe has not change much. And this has been very good news for the loyalist.

It wasn’t until the third generation that the shoe became one of my favourites due to the soft squishy feel on the first 2. And since then, the Kinvara has become my “To-Go” shoe of choice for various running workouts being tempo, speed or long distance. And most notable, it’s my race shoe of choice now for the Comrades Marathon. 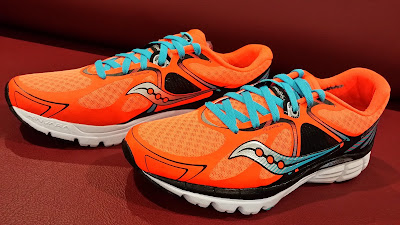 This year, I had the same privilege thanks to the kind people at Saucony Malaysia to race in the Saucony Kinvara 6 (K6) at the Comrades Marathon. I’ve received the shoe back in April and had about 2 months to get use to it. And no, I do not need that long as pretty instantly, my feet was already accepting it due to the very minor changes to it. From the cushioning, bounce, protection layers to the feel, it all feels familiar to what I’ve experienced in the fifth. And that’s certainly good news for it also gave me by best time to date at this year's Comrades Marathon 2015 too and not to mention a repeat success at Back 2 Endurance 2015. 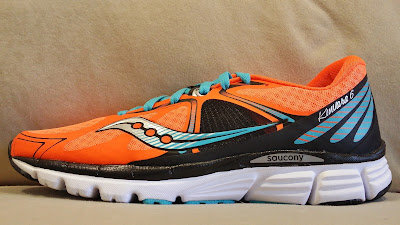 Lateral view of the Kinvara 6. 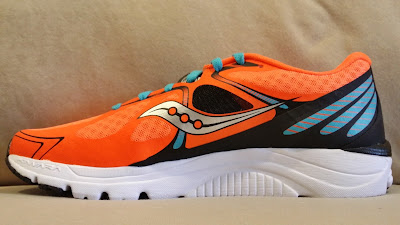 Medial view of the Kinvara 6.

So what did Saucony has done to make the K6 different from the Kinvara 5 (K5) since it still weights in at 218 Grams for a men size US9.0 with a heel to toe differential of 22MM vs. 18MM? Small changes that you probably won’t notice with the naked eye. First, the upper. A new open and breathable mesh to encourage better ventilation within the shoe. This will certainly be very helpful in our tropical weather. However, as the K5 was already excellent in this department, I hardly felt any difference in this new upper on the K6. Furthermore, it does really look identical except for the construction of the tongue where I kind of favour the K5 instead as it has perforation built into it. 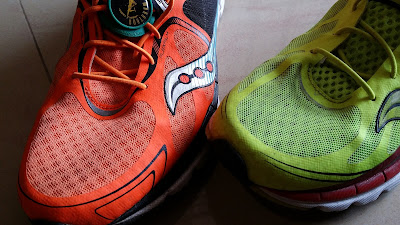 Comparing the K6 (orange) upper to the K5 (yellow) and the tongue too.
*don't mind battle scars as both went through Comrades

The next much obvious but only slight tweak was the placement of the FlexFilm, a super thin synthetic no-sew material welded on the upper to provide strength and fit. Most of the changes are made toward the central region where the mid foot is. And again I must say, the adjustment isn’t something I felt beneficial in terms of function. But I must admit that the modification does give the shoes a more handsome and pretty looks with 2 “pillar” like beams running along the Pro-Lock system.

And since I mentioned the Pro-Lock system, a fitting system to lock down the midfoot region  which I really like it on my K5, this is where a slight problem occurred during my races at Comrades Marathon and Back 2 Endurance this year. Hot spots on the medial side where the Pro-Lock runs under. It did not happen on the K5 but somehow, this happened on my left feet only. I did not blame the shoe as it only affected one feet and thus suspected it may due a defect. And throughout the course of using the shoe more, I eventually found out that there was slight material overlapping on it thus causing the irritation. No big deal and it has now been solved by some trimming. And working with the Pro-Lock system will be the single piece tongue which gives the wearer a sock like feel. Not as impressive as the higher end models ISOFit but it does the trick too, especially in keeping out debris. 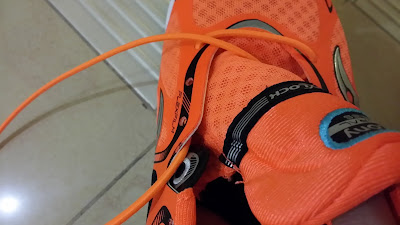 Internal bootie construction of the tongue together with the Pro-Lock system (black strip).

Cushioning from impact will once again be the duty of Saucony’s proprietary PowerGrid foam. Kind of surprise that the PwrGrid+ isn’t used instead as this will give the shoe some changes from its predecessor ad may even make the shoe a little lighter. But anyway, like its predecessor, a PowerGrid heel insert is inserted along the EVA+ midsole and on the outsole, XT-900 carbon rubber protecting the high wear rate area is used. And I've totally no complains about retaining this. 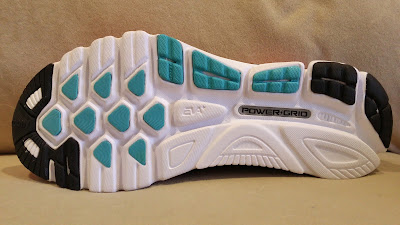 The outsole of the K6. True to the Kinvara lineage.

The cosmetic of the shoe on the other hand has been given a more lively change especially on the heel counter. Definitely more striking details there, however at the expense of some reflectives. The collar is still on Saucony’s RunDry lining providing a plush and dry feel on the Achilles. 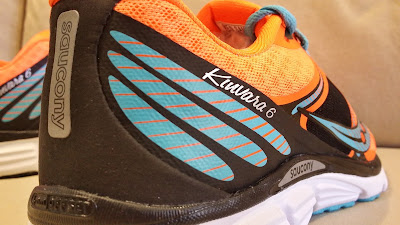 Really like the cosmetic design of the heel counter! 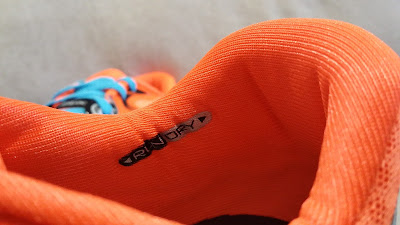 RunDry collar to keep the moisture away.

Overall, I am glad that Saucony made the K6 very similar to the K5. But if there is one change I would really like to see will be the use of flat elastic laces which they have now started using on models such as Zealot ISO, Ride and Guide. The current laces just didn’t make the cut for they come undone pretty easily. But anyhow, I will stick with the K6 for now as it is certainly the "To-Go" shoe for me before the imminent arrival of the next fast. 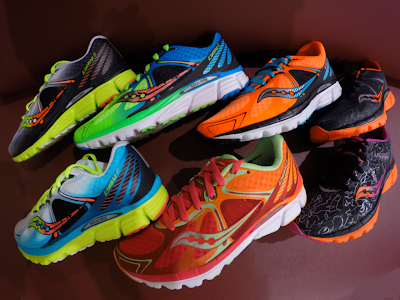 Kinvara 6 will be available in a wide array of colours!

The Saucony Kinvara 6 is now available nationwide retailing at a recommended selling price of RM399. They can be found at authorised dealers such as at Running Lab - Tropicana City Mall, Stadium and RSH stores nationwide.

This pair of Saucony Kinvara 6 is kindly provided by RSH (Malaysia) Sdn Bhd, the sole distributor of Saucony in Malaysia as part of my ambassador program.
Posted by Frank Chong at 2:00 PM No comments: