By Frank
Another year is coming to a close. It was like I just step into the year 2011, right now I'm saying goodbye to it. A year that was filled with work a plenty, meeting new friends and colleagues, a closure of a chapter and also the opening of a new one. Running was extremely minimal this year, but a few achievements was achieved and all I have to say is that I'm grateful that I'm still able to enter this entry here.
The most obvious turning point of my life in 2011 that affected me most will be the closure of the Runnerz Circle physical store. It was not an easy decision to end something I created from scratch but when something is beginning to go wrong, it's better to end it before further damage is done. In the 1 year journey, I'm glad I have good people who have stood by me yet even till today, and I have absolutely no problems with mentioning their names here. In fact, I'm proud to have them as part of a team. Jamie, Yip, Eugene, Raymond and Michelle, I sincerely THANK all of you for the assistance giving in believing in the principle that I've always believe and stood on.
A new chapter continued on. As Runnerz Circle ended its run, a new company was established with the company that was supplying me the most brands back then. But never did I though that I had this chance to actually establish Running Lab Malaysia with its founder from Singapore, Walter. Although it took a lot out of me even till today, I cherished the opportunity and trust given to me and will give everything to build the company and also to give back to the running community with the knowledge I've gained over the years. And it's also through here that I met new colleagues whom has been very helpful though we are separated apart by countries.
Though I may not be running fast or as long as before anymore in the year 2011, I'm glad that some friends especially Karen, Yim, Roy, Paul and Chee Kong are making really great progress themselves. Even without running, the knowledge towards the sports on how to listen to our body and being patience is something Khairul proudly showed out to the community. Chasing dreams is in everyone's mind, but these friends has shown to many out there, that it can be done in a fun way without risking much in life. And also, running isn't a sport about one self. It's about everyone around us, sharing the joy, pain and laughter together with every step taken.
As for running achievements, nothing much actually. I do not know my running distance for this year as my online training journal at Buckeye Outdoors suffered a server crash back in March 2011 hence not able to track back. However, despite doing more ultra marathons this year and completing the gruelling 100KM distance, most was done below par. However, most was done in a very "happy go lucky" manner in which most importantly is that I enjoyed them. 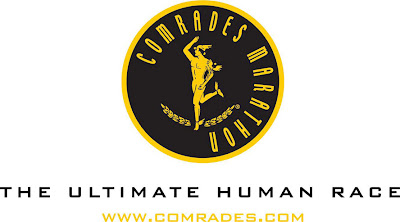 My ultimate 2012 race...
I hope to be running more in year 2012. I've managed to qualify for the ultimate human race, the Comrades Marathon 2012 "Down" race that is scheduled to be held on 3 June 2012. Qualification is through running a sub 5 hours marathon at an AIMS certified route and I did it the tough way at the Penang Bridge International Marathon 2011. The largest ultra marathon in the world and perhaps one of the most prestigious, training is something I really hope I will have time to do. Travelling halfway around the world, I will really want something out of it. And not forgetting that I will be running as part of charity to raise fund for cancer research, something I myself as a survivor have always wanted to do.
But anyhow, here's to a great 2012! And yes, I be racing again on New Year's day. What a start to it eh!
Posted by Frank Chong at 12:00 AM 2 comments: 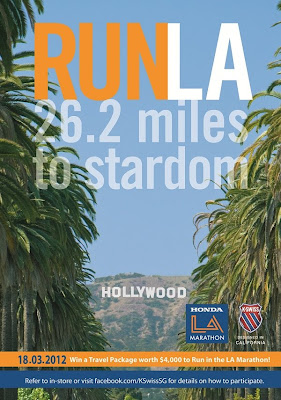 The LA Marathon contest is back! From 15 Dec '11 to 31 Jan '12, purchase any pair of K-Swiss shoes at Running Lab, Tropicana City Mall for the chance to win your place in the 2012 LA Marathon presented by K-Swiss!
We have 2 travel packages (worth SGD4,000 / RM10,000 each) up for grabs!
All you need to do is:
1. Take a photo with the K-Swiss logo at Running Lab and email the photo together with a short write-up in 50 words on why you deserve to win to KSwiss@outdoor-venture.com
2. In your email, please include your Full Name, NRIC number, Contact Number, Address, Age and Gender.
3. We will upload each complete entry onto www.facebook.com/KSwissSG by the next working day.
4. Winner will be decided via number of “Likes” at the end of the campaign.
Terms and Conditions:
• The contest is open to citizens/permanent residents aged 18 and above.
• Employees of K-Swiss, Running Lab, Outdoor Venture, Sports Haven and their immediate family members are not entitled to enter the lucky draw.
• The contest period is from 15 December 2011 to 31 January 2012, both dates inclusive.
• 2 winners will be selected from the contest. Each prize includes round-trip plane tickets between Singapore and LA (if the winner is residing in Malaysia, he/she will have to take care of own transport to and from Singapore), accommodation, LA marathon entry and local transportation. Winners have to take care of their own passport/VISA expenses. Prizes are not exchangeable for cash.
• Travelling period will be from 16th to 19th March 2012. The date of the LA marathon race is on 18th March 2012.
• The winners agree to co-operate with and participate in any advertising or publicity activities of K-Swiss relating to the Draw and agrees that K-Swiss may publicise the name and/or photograph of each winner in such mode and manner as K-Swiss considers fit, without any payment or compensation thereof.
• The winners will have to submit a post-race report of 300-500 words including photographs for K-Swiss’ use.
• If any person is subsequently discovered to be not entitled or ineligible to participate in the Draw or ineligible to receive the prize, K-Swiss reserves the right to forfeit/reclaim the prize at its discretion and confer the same on any other person as may be selected by K-Swiss in any manner as K-Swiss deems fit. No person shall be entitled to any payment or compensation from K-Swiss should any prize be forfeited.
• K-Swiss reserves the right to change any terms and conditions without prior notice. Unless otherwise indicated by K-Swiss, all prizes are non-transferable and are not exchangeable for cash or for any other item.
• Winners will be announced (on facebook.com/KSwissSG and in-store) on 7th February 2012 and prizes must be claimed by 20th February 2012.
• All winners will be contacted by phone/email and must present their NRIC to claim their prizes.
• K-Swiss shall not be responsible for any consequences including but not limited to loss of life, injury to person and/or damage to property arising from or in connection with the Lucky Draw and/or redemption or use of the prizes.
Posted by Frank Chong at 8:03 PM No comments:

By Frank
Time certainly flies and it is now 2 years since I ran my marathon personal best at the Macau Marathon 2009. And according to the Boston Marathon qualifying standards, a personal best will only last for 2 years. And with my "expiry" date just around the corner, looking back at fond memories of Macau will be a good idea.
Back then while preparing for the Macau Marathon 2009, I have set my sights that it will be the marathon that I will give my all sacrificing everything that may come in my way. "A sub 4 hour is a must!", I told myself. I trained hard and smart and live a dull lifestyle. "Why dull?", you ask me. I changed my lifestyle for a period of 6 months staying away from delicious but yet unhealthy food, sacrificing my time with friends by going to bed early in order to wake up early the next morning to clock the distance and doing nothing but to train. I clocked an average of 25KM per day and at one point even managed to hit 300KM in a span of just one week. Macau 2009 (photo credit to Lynn)...
The trip to Macau with my travel mates of Lynn, Chin Chin, Shih Ming, Saya, Shine, Victor, Raymond Hee, Keat Seong and Jennifer was a memorable one too. The nervous moment for me only came in the morning of the race day where I stood aside from everyone to calm my nerves. I wanted to be alone for a moment before the race start for I do not know what may happen to me. And when the race started, I never looked back and went for it. I ran with everything I could and finally did it though I miss my target timing by around 5 minutes due to a toilet stop. It was a painful run and in the end after crossing the finish line, I almost blacked out with a very painful pair of legs. I was cold and I just laid on the stadium track alone till Keat Seong came to my aid. 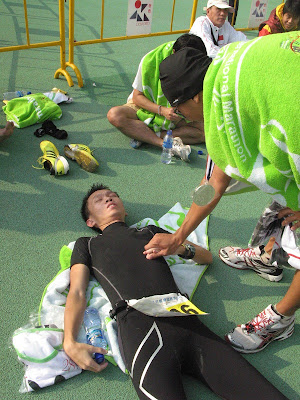 A painful personal best (photo credit to Jennifer Ng)...
And today, looking back at it and seeing many friends participating in this year's edition certainly bring back fond memories of it, and in the mean time being envious of them. I have not run a good marathon timing since then. I though my body deserve a break after that but the unfortunate happen when I fell from my bike a month after, injuring myself. And since recovering, my focus was on the ultra distance, something I truly enjoy till now.
I don't think I can hack away my marathon personal best and it will be this to stay till I check-out from this world. It's not easy to run a sub 4 hour marathon and with many ultra distance events I want and favour to do, running the marathon has become something secondary for me. I still do enjoy it, but running the ultra brings out a different something out from me.
Come this 4 December 2011, to my friends like Yim, Ben and Yee Hua who will be running this year's edition, do run well for it's a fast course. Besides, with nothing much to see over the 2 loops, I'm sure a fast time will be in the pocket considering the weather is just almost perfect. Therefore, if you guys are able to read this before the run, do say "HI" for me to both the MGM lions. :)
If you guys are wondering what is my personal best timing, it's 03:40:38 hours clocked at the Macau Marathon 2009, and this personal best timing will expire this 4 December 2011. An end of an era for me. But perhaps a start of something new...
Posted by Frank Chong at 7:00 PM 2 comments: