By Frank
It was a tough day for me. Tough as I finally announced the closure of the Runnerz Circle physical retail shop via Facebook after putting up teasers for the past 5 days (and maybe through this entry here), scheduled to finally close its door on 19 June 2011. After a year down the road, things did not shape out the way I intended it to be. As like my fellow tri-athlete friend in Hong Kong said, passion sometimes can't bring wealth. Guess I have to agree with this now.
It's not easy to survive in the sports retail business locally especially when importing brands that aren't available locally or even without support here. Support is given internationally and this carved the way for parallel import which undercuts the retail pricing set. Even so, other retailers who operates without license sells the product at a much lower price thus killing off the industry. For your info, even night market vendors have license to operate.
Software and entertainment piracy was once a problem here. Much has been done and finally the war on it has proven fruitful. How I wish it was the same for me. To me, the above retailers that doesn't have license or follow the rules of the games are no difference from these pirates. I understand that our sport gears and merchandise are not cheap here, but honestly I have done what I can to bring the price down without having to kill off myself. But in the end, I was at the loosing end myself. To the consumers, of course the products are the same unlike buying a pirated CD or DVD. However, ask yourselves, are you doing justice to the industry or perhaps to a friend in the business?
Am not going further in detail on what had happened the last 1 year. From the closure, I guess most of you are able to guess it. A couple of weeks ago, I had my last team dinner under the Runnerz Circle name with the people who have been part of the team. As part of the team, the announcement was made to them first before the public one today as they truly deserve everything in advance for the effort and support given to me. Before ending this entry, I would like to thank Jamie, Eugene, Raymond, Michelle, Chin Chin and Yip for being part of Runnerz Circle. And to the rest who had supported Runnerz Circle, my most grateful gratitude and thanks to you all. Runnerz Circle, 28 July 2010 - 19 June 2011. But trust me, it's not the end for me yet... 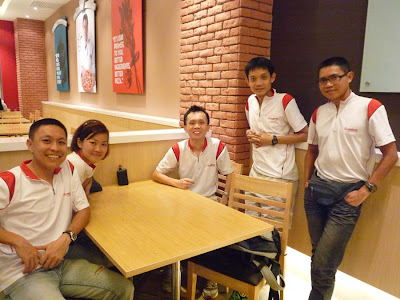 * A note to Jamie and Geraldine. I'm still and will be keeping the flowers I received from the both of you a year ago. Though dried up, it will still make a meaningful memento.

By Frank
Sorry for the lack of updates. Just has been too tired from work related issues, that training is down the drain. Even the spinning session didn't go as plan, and the only workout I have is only on the weekends. How I wish a day is longer than 24 hours. Sigh...
Anyway, as of last weekend, the discomfort on my left ankle is still bothering me. Running distances above 15KM will initiate the pain. And during the usual 20KM run over at Kinrara, I was forced to walk back at the last 5KM. It was then that Jamie had told me to think about my upcoming adventure. Sadly, I have to agree with him and that brought me to the realm of thinking. The chance for a 50% refund in case of pulling out has just ended just last week. Though I have yet to make up my mind, I was lucky enough that I had not purchase any transportation tickets nor accommodation. Just in case I really am forced to pull out, the damage won't be that great.
A few days ago, I did a 10KM and a 15KM run. Pace was reasonable and I was glad that there weren't any pain. I hope it will stay this way, but honestly speaking, I need longer distances to justify it. I really want to run the century distance whether if I'm fully prepared for it or not. Timing is no longer an issue, I simply just want to complete it. And if training isn't enough, I still believe I can managed it through the experiences gained the previous attempts. Last year's 84KM adventure was done with minimal training and although I know an extra 16KM will make a huge difference, I simply believe I can. Just allow me to run this, as after it, running time will be extremely hard to find.
I simply just want to run it. But I won't be afraid nor be shameful to pull out if I'm really forced to. I just probably be sad but that will heal with time. To pull out or to push forward, that is something that should be revealed at the end of this month. I will really have to dig deep this time.
Posted by Frank Chong at 12:53 PM 2 comments: