Back in year 2009, I blog about running into the next year. This time, I am going to recycle the blog title for while this is being published, I am in fact in the midst of running an event. Of course this entry was well written even before today, in fact before I flew to South Africa. Had it first drafted before slowly improving it. And yeah, it's the final day of the year again. Time for some farewell note to 2012 and say HELLO to year 2013!

And so, I am into my 5th day of running at the Year To Year Circuit Race at Pretoria, South Africa. And at time of posting this, with a busted left Achilles  I am still running clocking a distance of of 463 loops which equals to 231.5KM. It's 31 December 2012, 11.35pm here and there is still around 1.5 days to go and hopefully I will keep running! Running from the final hour or even minutes of year 2012 to the first second of year 2013. Certainly a first time for me.

The Year 2012 has been another up and down and even twisting around roller coaster ride for me. Been so tide down with work and also the establishment of a new department within the company, how do I get myself out there to run? But I managed to survive through and am now a member again at the gym where I will be running "hamster" style on the treadmill.

The highlight of the year will certainly be the Comrades Marathon 2012, my toughest, dearest and biggest accomplishment to date. Not only completing the run in a very tense finishing moment, I even ran it for charity in raising funds cancer research under CARIF (Cancer Research Initiatives Foundation) which I now champion. And a few months later, I was appointed the official Malaysia Ambassador for Comrades Marathon, a role which I am so honoured to carry. 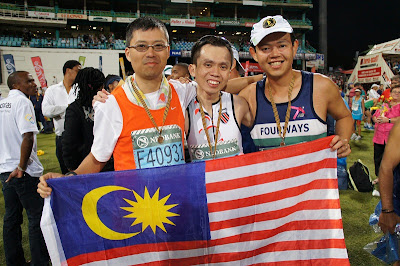 Proudest moment of our running career with Wong and Chee Kong upon completion of the Comrades Marathon 2012... 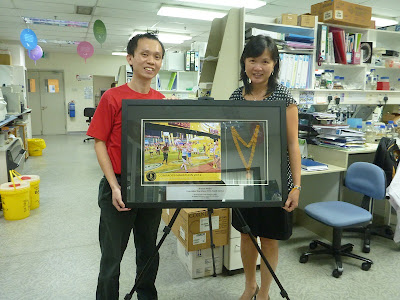 Presentation of my Comrades Marathon 2012 to Professor Dr. Teo So Hwang, CEO of CARIF...

Then came the heartbreak event, the Craze Ultra 2012, my first attempt at the 100 miles distance. I suffered my very first "Did Not Finish" as I called it quits upon arriving at the half way point. The weather was terribly HOT and I experienced chest discomfort and breathing difficulties as I tried to tackle the distance. Sad indeed, but I managed to get over with and the positive thing is that I am still here in 1 piece.

Beside the 2 above and some other events like Twilight Ultra Challenge, Standard Chartered Kuala Lumpur Marathon, The North Face 100 Singapore and Penang Bridge International Marathon, the other more important highlights of the year will be the number of new friends I made. It will always be through events like these especially ultra marathons that new friends are made whom I cherished.

So in the year 2013, I will be returning again to the Comrades Marathon and also attempting at the 100 miles distance again at the same Craze Ultra. Though I still see the following year to be a busy one in terms of my job, I hope I will be able to manage it even better compared to 2012. Am so currently out of shape now and I hope to return to my year 2009 self.

So yeah. HAPPY NEW YEAR 2013 everyone! Till I get home (wish I could stay longer at South Africa), do enjoy yourselves and may the new year be a greater one than before! * Back to running now!
Posted by Frank Chong at 5:30 AM No comments:

The Two Oceans Marathon at Cape Town, South Africa's second largest scale ultra marathon at 56KM to be held at the end of March on an annual basis was suppose to be on my to-do list for next year's running calendar. However, due to the arrival of someone very important to Chee Kong and Mei-Ee, I had to cancel it and thus came the idea of trying something new. Something I have not tried before. Running on a 500m field track for 6 days! Yes, it's not a typing error. It's 6 days and you though Twilight Ultra Challenge or 12 Hour Walk is already crazy! And it's IAAF certified. Don't play play!

I would not have though that I will be travelling off to South Africa again this year. That's twice in a year in a matter of 6 months! But the 6 days event is something I really want to try, running from year 2012 into the new year of 2013. The event is call the Year to Year Festival of Running 2012 to be held at Pretoria, some 50KM away from Johannesburg.  Running from 12.00pm (South Africa time) 26 December 2012 till 12.00pm (South Africa time) 1 January 2013, this common event is certainly a very unique to us from this part of the world. For more info, fire on this LINK. 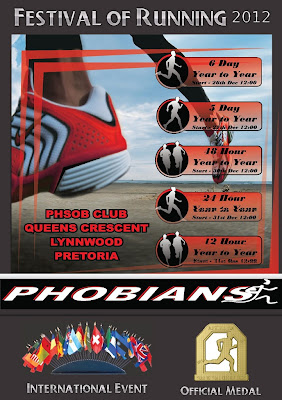 Year To Year Festival of Running 2012. Notice the Malaysian flag...

The event has many categories though with 12 hours, 24 hours, 48 hours, 3 days and 6 days worth of running. Myself and Chee Kong will be taking part in the 6 days event while Mei-Ee in the 24 hours category. Salute to her! However, we do not need to run throughout the entire duration of the event as we are able to rest in between. Participants will be allowed to set-up our own camps, tents or even canopies around the vicinity. Even a swimming pool and braai pit is there to pamper ourselves and to kill boredom, just in case we go "crazy".

At the end of the event, we will be presented a finisher's medal plus a trophy. The trophy has 3 categories though being Gold, Silver and Bronze depending on the distance we cover. But as my last long run was at Penang Bridge International Marathon 2012 about a month ago, I know I am under train for this and it's fun and  fun and a bit of craziness that I am seeking.. It's plainly for experience,  fun and a little training for next year's Comrades Marathon. But for the past 2 weeks or so, I've put in some serious speed training on the treadmill to raise my heart rate a little. This hopefully will give me some "kick" to last the entire 6 days. Oooh... And also, they recently announced that this is a certified Comrades Qualifier.  But it won't be easy.

The trophies for the 6 days race is allocated to the below distance: 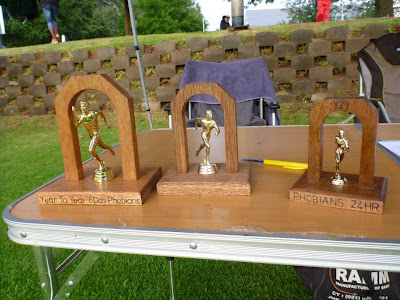 Sneak preview of the trophies...

I be leaving on board the Emirates Airlines on 20 December 2012 and will do a lay over at Dubai before continuing to Johannesburg. Upon arrival, I will have one night there before flying off to Durban before continuing on backpacking trip to East London. And on Christmas Day, we will fly from Port Elizabeth back to Johannesburg to prepare for the running event the next day and in the meantime to celebrate Christmas. So as usual like my all previous long haul trip, the following will be my packing list.

As you can see, I have prepared 2 of my current loved running shoes being the Saucony Kinvara 3 and Hattori to be my run shoe of choice. Although the race director did mention to prepare 3 pairs and also to alternate them between around 30KM or so, I will probably go barefoot at times as the event is being run on grass which Chee Kong has told me that it is pretty well maintained. Besides, it may rain so I do not want to dirty my shoes. Just hope it does not rain hail else I might suffer a knockout! Hahaha... 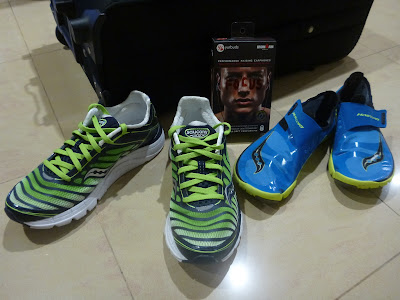 Race shoe of choice, the Saucony Kinvara 3 and Hattori with the Yurbuds IM Inspire Duro ...

And also, thanks to Techventis International for sending me just in time a pair of Yurbuds IM Inspire Duro. I've put on the past couple of weeks during my training runs and am simply loving it. This will help keep me entertain while I go running round and round.

Will have another 4 days after the event so hopefully, my legs will be able to hold on to further activities which is to visit Krueger National Park at Skukuza and Satara. It's one of the most prestigious national park in the world and if not mistaken, the biggest in South Africa. It's about 500KM from Johannesburg and Chee Kong will be driving there. Will spend 2 nights there before returning to Johannesburg for 1 more night there.  Will fly back on board an Emirates A380 on 6 January 2013 noon and my first time on this jumbo airline!

I am very looking forward to my second trip to South Africa again. Missed the beautiful country and also my South African friends there! Oooh... And also the food of course. And hopefully when I am back home, I won't be already a crazy nut counting the number of loops. Numbers by then should be something I will be really afraid of then.
Posted by Frank Chong at 9:30 AM 4 comments: