Like the Saucony Kinvara 7 (K7) which was my “To Go” road shoe, I had the opportunity to get both my feet on my “To Go” trail shoe, the Saucony Peregrine 6 (P6) way before it was available in the market thanks to the people at Saucony Malaysia. However, I kept a low profile on it and only tested the shoe when I was all out at the trails by myself leading up my race at West Highland Way Race 2016 where the P6 was my chosen race shoe. 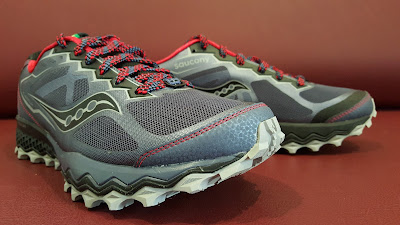 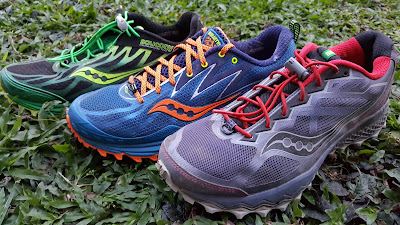 After successfully racing the West Highland Way Race 2016 in the P6 which is where this review is entirely based on, it’s now time to recap and put it into words. Built under Saucony’s RunAnyWhere line-up of trail shoes, I remember how surprised and at the same time delighted I was when I saw the P6 for its very first time about a year ago. Having trained and raced with both the Peregrine 4 and 5, I was surprised that Saucony took the risk and plunge to change its core design after 5 generations and delighted at the same time too that they did and for the better for the P6 finally “matured” into a sleek, aggressive and fast “Peregrine” (referring to the falcon). Completed redesigned from scratch, the P6 not only spots a totally new upper, but a new midsole and a totally redesigned outsole. 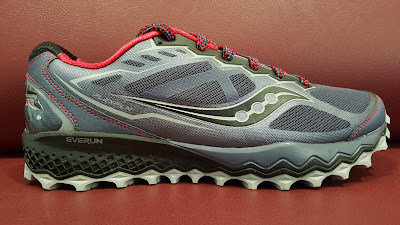 Lateral view of the Saucony Peregrine 6. 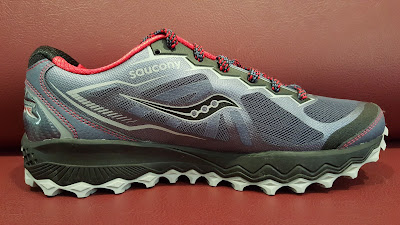 Medial view of the Saucony Peregrine 6.

After having spot the same last for the past 5 generations, the P6 arrived as a fresh new design. The upper now utilizes a new engineered stretch mesh which offers a smoother feel and look compared to the previous ones used which was more traditional looking. Smooth to the touch, it still retains the excellent ventilation as found in previous generations, if not an improvement over it. Being a stretchy material, one can expect a very forgiving toe box where my toes were splayed throughout my entire 28 hours out at the highlands. No hot spots, no blisters, no chaffing and very quick drying was what I can say about it. And to hold up the shoe’s upper by giving it a little structure without compromising on durability was the usage of FlexFilm, a thin but strong layer of synthetic material which offers fewer layers on the upper for a seamless and flexible feel. 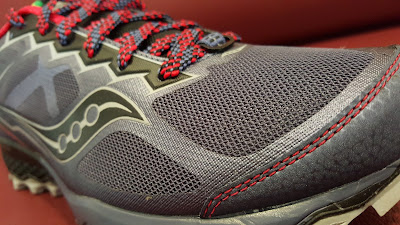 A completely new engineered stretch mesh with a
reinforced toe cap to withstand any accidental kicks..

The external heel counter has a semi rigid but yet flexible plastic cupping built into it to give better stability to the ankle. Cosmetically and personally, I find it very good looking with not only the Peregrine insignia on it, but a set of coordinates which if you are interested, will bring you the banks of Saucony Creek at Kuztown where the Saucony was first founded. The collar is then rounded off with the RunDry lining to keep sweat out of the shoe while giving a plush feel. 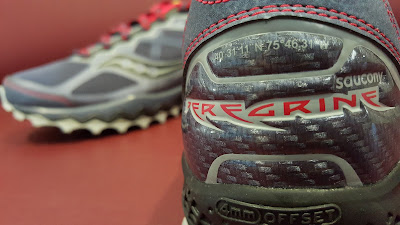 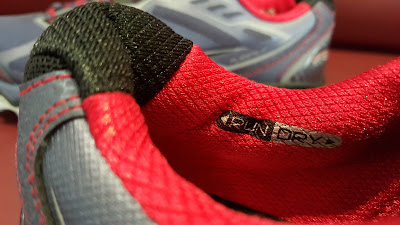 The toe cap is reinforced by a durable and rugged looking rubber piece. Despite having trip over some rocks and also kicking my foot over it, the toe cap does it job very well, that’s it to shield and protect my toes. And not only that, it held up very well too. No chipping off or rubber coming undone especially with much exposure to different elements such as heat, water crossing and yes, even cow dung too (who wants to steal my shoe better think twice now).

With a gusseted tongue, any unwanted debris that may find its way into the shoe is minimized. And not only that, it gave a much better fit as it wraps around the feet nicely and snugly. Not as plush as the ISOFit found in the Zealot, but it does its job well here. And with a gaiter clip found at the front, a secondary protection can be added, especially when one is running through dirty terrains where debris may enter through the collar area. And the laces, unlike previous generations has been shorten which now fits better. And yes, it’s still made of the same durable material and it stays put to its place without coming undone easily. No worries about stepping over it. 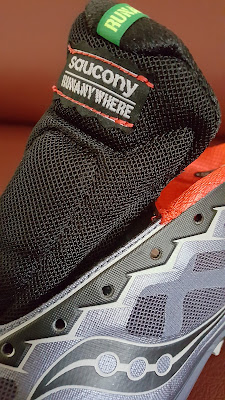 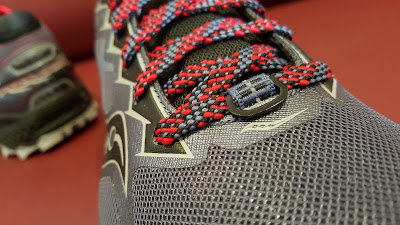 The gaiter clip and the awesome lace.

The midsole saw some minor changes especially on the heel insert. Gone is the PowerGrid foam there being replaced with a new continuous cushioning foam call EVERUN which offers 83% energy return and 3 times the durability. It started off pretty firm but after a few runs, the foam will be “broken in” and I could feel a slight difference. Honestly speaking, not a huge world of difference compared to the already good PowerGrid in the “Feel” department, but I believe it’s for the better as Saucony continue to evolve it. Besides, I could see it holding up pretty well despite my shoe having gone through over 300KM in distance in various conditions. That’s really 2 thumbs and 2 big toes up for me! 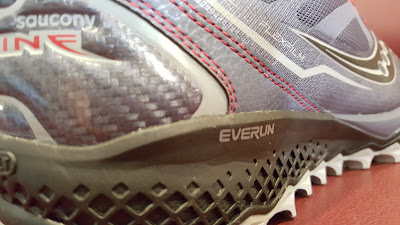 Breakthrough in cushioning where EVERUN replaces
PowerGrid at the heel insert of the Peregrine 6.

Most previous Peregrine users had asked for a higher stack height and Saucony had listened and responded for the next midsole upgrade saw an additional 1MM of stack height bringing the P6 up to 21.5MM on the heel and 17.5MM on the forefoot and hence still retaining the sweet 4MM offset. Although thicker now to try numb any ground feel, the P6’s ride is still pretty low to ground and hence one can still feel very stable in it.

Over at the forefoot encased within Saucony’s SSL (Saucony Super Lite) EVA is the EBO (External Bedrock Outsole), a protective rockplate made of flexible but yet strong nylon fiber to shield and protect from sharp rocks or rugged terrains. It’s generally lighter in weight compared to traditional thick rubber and more versatile compared to carbon fiber. 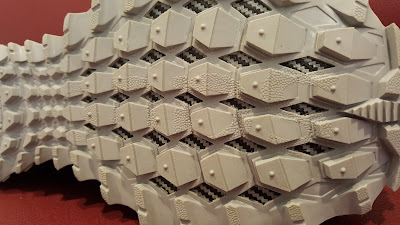 The EBO rockplate as seen in grey/black "zebra" line embedded into the midsole at the front.

For those who remember the outsole design of previous Peregrines where it utilizes multi directional lugs and 2 different rubber compounds to achieve excellent traction in both rocky and muddy conditions, the P6’s new outsole, achieved not only what it predecessor’s did but improves over it. Now with a 1 piece design and new carbon rubber compound call PWRTRAC offering an even tackier ride and 3 times more durable compared to traditional carbon rubber, it together with a newly redesigned multi directional thread with deep angled lugs that resembles mini falcon talons, gives the P6 an exceptional comfortable and confident ride. 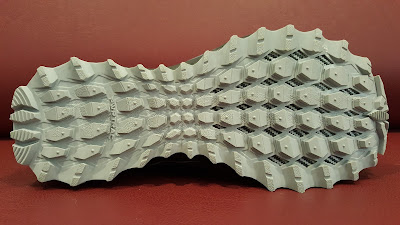 The multi directional lugs of the new PWRTRAC outsole.

That’s all the positive for the P6 but what amazes me is that despite all the changes and upgrades from the above, the P6 still weighs in at 266 Grams for a men’s size US9.0. And that’s 6 Grams shaved off from the P5! Well done Saucony!

There’s many to like about the P6, but like all shoes, gadgets, accessories and others, there will be a few dislikes as none is perfect. First, the ventilation despite being top notch, the upper like P5 still allows super fine debris like sand and ash to enter the shoe. Not really a big deal in this part of the world, but I do hope that Saucony can come up with a cross between ventilation and debris protection for this part of the shoe. But do note that there is a FlexShell version of the P6 releasing soon, where it offers water repellency with a close top upper where it will solved the debris issue at the expense of a few grams and ventilation.

Next will be the EVERUN heel insert. It seems that being only inserted on the heel area, not much difference can be felt. A full length EVERUN insert will be more preferable and hopefully, this can help with impact absorption and also toe-off as footing and landing zones on trails differs much from road.

And finally, at 266 Grams, the P6 is already very light for a trail she of this class. But I believe it can go even lighter with the semi rigid plastic on the heel counter be replaced with some other lighter materials such as those found in the Kinvaras. 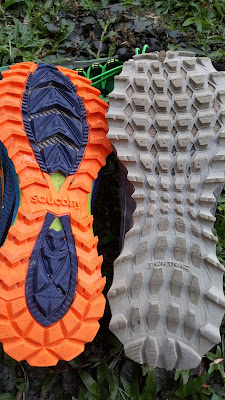 I've started wearing the Saucony Peregrines since the fourth generations. It got better at the fifth but the sixth has set a new standards in my very own opinion on trail shoes. The Saucony Peregrine 6 has won numerous awards worldwide but 2 awards stands out most which is the coveted Runners World Editor’s ChoiceAward and OUTSIDE Gear of the Year 2016. Awards are definitely able to market the shoe well, but what most important is the feel and ride from the individual’s wear experience. And after more than 300KM worth of trail adventures especially in the rugged West Highland Way, all I can say here, it truly deserves its awards! 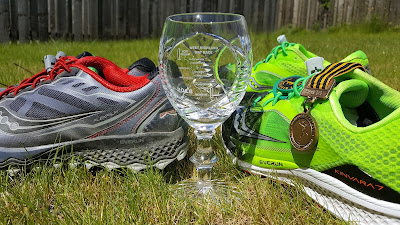 The Saucony Peregrine 6 with it's cousin, the Kinvara 7 together with the Comrades Marathon medal and the West Highland Way Race goblet. 2 amazing shoes, 2 amazing races.

This pair of Saucony Peregrine 6 is kindly provided by RSH (Malaysia) Sdn Bhd, the sole authorised distributor of Saucony in Malaysia for test and review purposes and all opinions are based solely on personal takes.
Posted by Frank Chong at 9:00 AM No comments: