Those who knows me, especially my past history will know that the Terry Fox Run is part of me every year. A charity running event held annually to remember Terry Fox and also towards cancer research.

My third Terry Fox Run since 2006, this year saw a massive crowd, probably the biggest I ever seen. I participated this year with Lynn, Loke, Luc and Wai Lam. Not forgetting that I met Niki, Richard and Stephen too! Way to go guys! I've earlier done a 10KM slow and easy run as I start my tapering phase and therefore, a further 5KM will be just nice.
. 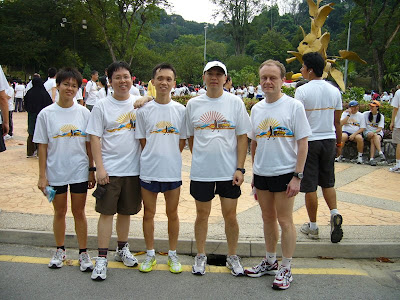 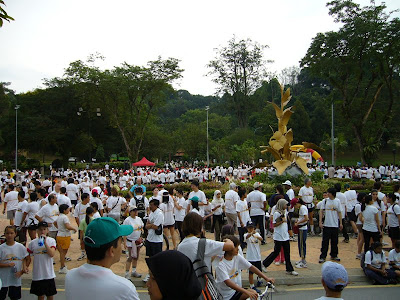 What a huge turnout...

We started from the middle pack after some delay and had trouble finding the way through as the roads were narrow leading up to the top of the deer park. Besides, most are walking. We grouped together for some chit chats before Loke decided to begin running as we hit the bird park. Being tempted by him, I started running with him. I thought Lynn and Luc will start running too, but I was wrong as I turned back shortly later and could not spot them. With this, I went ahead with Loke. 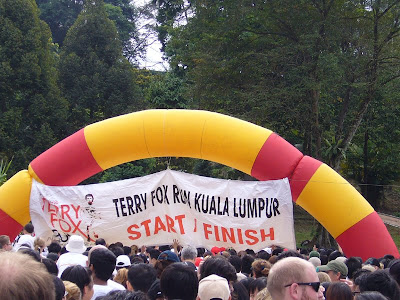 The same start/finish arch at the same spot...

I must say that Loke can certainly navigate through the crowd very well. I sticked with him till we hit the advance route heading towards Carcosa. Pueh Tian who was there snapping photos called me and he managed to snap a photo of me. Thanks a lot! The advance route is much easier to run with what I can describe as almost empty! Went on a faster pace here before detouring back to the normal route slowing down till I finish the run. Light snacks and drinks were served and I certainly enjoyed this year's run. To those who particiapted, I sincerely thank them for being part of it as it does brings a lot of joy and hope to those fighting cancer, loved ones and also to survivors too.

I did not time myself this time as compared to my last 2 previous years but I felt I went at an OK pace. This is the first time I handed the Nike LunaRacer+ it's first run on tarmac and I was simply blown away with it. I just need a few more runs in it to get use to it before handing them a race debut, most likely at my sixth marathon! And with this event, I now officially enter my tapering phase. I will certainly miss the trainings I had with my running mates, at least for now.

Bought 3 tshirts for the family on Friday but it turned out I caught the flu bug so had to forget the whole thing. Too bad, but I'm still planning to do our own Terry Fox walk in the park with my kids when I get better. We have the shirts oredi! It's the thot that counts, right?

Happy tapering, Frank, and save the best for the bridge!

Thanks haza. Wil you be running the bridge too? Get well soon ya, and thanks for supporting the Terry Fox Foundation.

Greetings from the Terry Fox Foundation!

Would you be good enough to email me?

I have a request regarding your blog.

Thanks for sharing your fabulous photos..! Your Nike lunar shoes are looking superb.