By Frank
.
The Nike LunaRacer+, the racing version and big brother to the Nike LunarTrainer+ was introduced to me back in August 2008. But I did not have the opportunity to run in it until October 2008 recently. Since I have reviewed the LunarTrainer+ which can be seen by hitting this link here, I will not go to deep into the LunaRacer+ as it is build pretty similarly. Instead, I will highlight on the major differences.
. 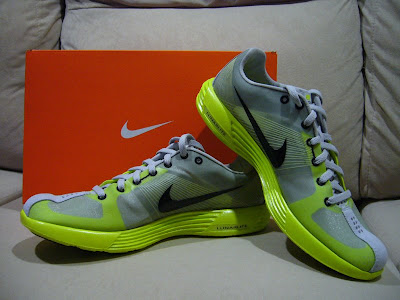 Similar to the LunarTrainer+, the LunaRacer+ is a neutral cushioning racing shoe designed and built around Bill Bowerman’s original 1972 “Moon Shoe”, hence the use of the waffle tread. Revolutionizing the shoe further was the use of the LunarLite foam jointly developed with the aerospace industry that gives the shoe its unique cushioning system. Not forgetting the reference to the Nike Free series thus giving the shoe’s its great flexibility, and the Nike+ concept that makes the shoe a “running computer” with the use of the Nike+ Sports Kit or SportBand.

The difference between the LunarTrainer+ and the LunaRacer+ can be felt immediately after holding it as the latter weights ridiculously light at only 156 grams! That’s almost half the weight as oppose to the LunarTrainer+, and it’s really tough not to run fast with it. So how did Nike achieve this? As seen from the shoe, gone is the traditional air mesh which is replaced by a hip futuristic looking semi translucent nylon sheet called the FlyWire. FlyWire features threads of nylons being interlaced with each other to provide superior strength for shoe and fitting for the wearer’s feet. No stitching was visible and one can be sure it offers the seamless fit thus eliminating abrasions. However, due to the FlyWire technology which made the shoe felt tighter, it is recommended to choose half a size bigger. But for some reasons, my right foot which is a quarter size smaller than my left experienced some rubbing on my tiny toe against the shoe wall. A quick check with 2 of my running mates too had the same problem. No problems on the left though. And due to the nylon threads, I’ve notice not a single hole around the shoes hence the feet felt warmer as ventilation was a tad poor. 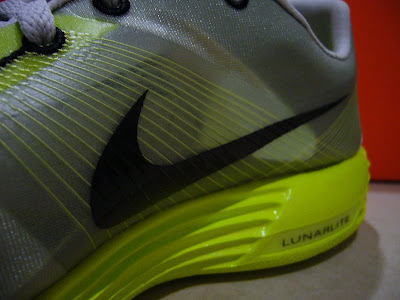 Up close and personal on the FlyWire...

As with the LunarTrainer+, the LunaRacer+ uses the same cushioning system based on the LunarLite foam which is encapsulated in a lime green phylite carrier forming the outsole which then the tread is shaped like a waffle iron. However, the LunaRacer+ has a much lower profile hence giving the wearer a much more “road feel”. A quick check on the outsole shows that the waffle pistons looks a bit larger compared to the LunarTrainer+ with a slightly different design where each piston comes with “nipples”. Coupled with additional BRS 1000 carbon rubber to prolong life span at high wear areas, I felt the traction of the shoe much improved especially on wet surfaces over the LunarTrainer+. And probably due to this and the virtual post hidden at the heel of the outsole within where the LunarLite word is, both my feet did not feel wobbling around too much even though the shoe looks narrow in fit with less “foundations” touching the ground. 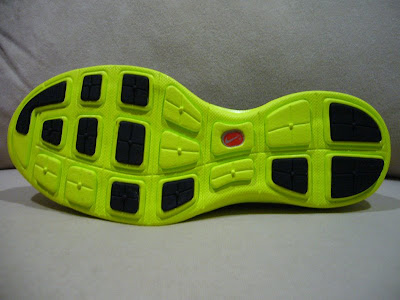 The waffle tread. Notice the "nipples" on each piston... 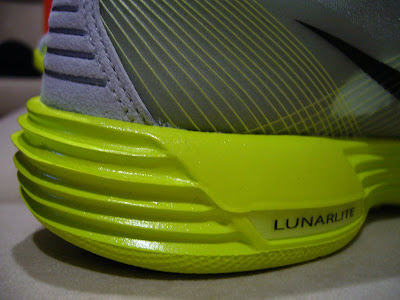 The virtual post within where the LunarLite word is...

Some other good to know stuff about the LunaRacer+ are that since the collar is designed very thin, it is recommended to wear well padded ankle length socks to protect the Achilles heel from any abrasion that might occur. Not forgetting that the socks need to be sweat wicking due to the shoe’s ventilation. Addition to this, do try out different lacing methods to eliminate hotspots as the shoe’s tongue is thin and the narrow fit tends to be tight at the forefoot area. I personally used the traditional criss cross lacing method but I loosen the area around the forefoot. 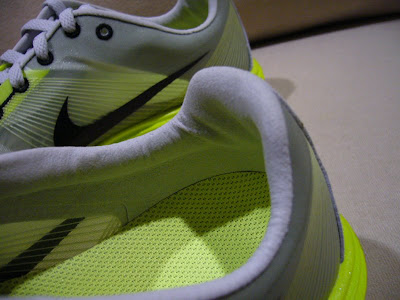 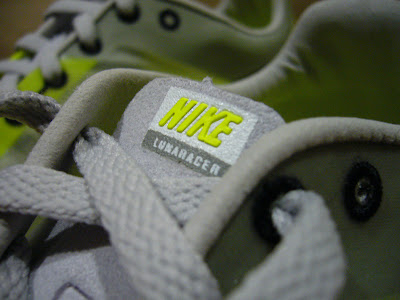 It’s really hard to judge and recommend the Nike LunaRacer+ as it may not suit everyone due to its design. You just have to give it a try to feel it. But from my personal view, it’s a great shoe. And if you fit comfortably in the LunarTrainer+ like me, then you’re in luck for this shoe may help in achieving a personal best. Do check out Jamie’s take on the Nike LunaRacer+ too by hitting this link.

The Nike LunaRacer+ is now available at all Nike stores retailing at a recommended price of RM439.

How did the sizing of the Lunaracers compare to the Adizero Tempos?
I have Tempos as well and wanted to get some Lunaracers and need some input, as I can't find anywhere to try the Lunaracers on.
Thanks

Much smaller and tighter fit. You might want to consider half a size bigger.