My third year in a row outing at Gunung Nuang Ultra (GNU) and my second race of the year. Something I certainly look forward to but certainly physically not prepared for it as my fitness level has dropped tremendously due to my hectic work.

I woke up to a sore upper back. However to my surprise, it wasn't my usual left side but instead it was for the first time, the right side. Had difficulties turning my neck and tried to stretch it away but to no avail. After the usual and with more than enough time, I rook a slow long drive to Pangsun which took me about an hour. Arriving there, I learnt that I am not the only early one as the main car park was already fully filled leaving me park at the entrance. Not too bad for a parking spot anyway as it was just next to the guard house.

Made my way to the hut to drop of my drop bag and prepare myself before the urge to make my "deposit". To my horror, my usual secret toilet was locked off and I had to use the dirtier public toilet. But when one needs to go, he needs to go.

Fast forwarding ahead, I was hanging out with Jeff and Wai Hong and the start line which eventually led me to start at the front later. And at 6.30AM sharp, after a short briefing, some close to 300 runners were set loose to loop from the foot hill to Lolo and back for 12 hours.

Due to the heavy downfall yesterday evening, the surroundings was humid and the first stretch up which was made up of cement pavement was really slippery. Slowly making my way up while trying to balance myself wasn't easy and it required additional strength and attention. I believe most was struggling as I passed some other runners ahead. Not many of them but they were good runners and this showed how tough it was. Only a few zoomed into the darkness ahead.

Eventually, I entered the trail section after a Kilometer. Things didn't get any easier as the rocky sections was just as slippery and also certain patches were muddy. This is Gunung Nuang at one of it's toughest., at least from my previous visits here. A mile into the race, the first hut is where an extra water station was set up by the organisers. Good effort from them as this will be helpful in the later stages.

I pushed on alone till the mid span where it then began to drop. From there slowly, runners after runners soon began to caught up and eventually passing me as I tried to find balance as I headed towards the u-turn point at Lolo. Got there safely and there were signs of dawn. Head torch was still needed though as I made my way down. It was relatively much easier compared to the journey up earlier, as I waited for the morning sunlight to break into the forest.

It was getting congested too with runners from the opposite directions filling up the tight running space. But was glad that most runners were courteous to give way to each other. And when the surroundings finally brighten up, it was time to remove my head torch and it was a sense of relieve fro my head.

Halfway down, I spotted a runner sitting my the side. Sensing something was amidst, I asked if he was all right. He replied that he was experiencing cramps on his quads as I helped him stretch a little before helping him get back up once he mentioned that he had felt relieve. Glad to be able to help as I continued my journey down and eventually completing my first loop with some extra little effort, especially in trying to keep my mid off my sore upper back. 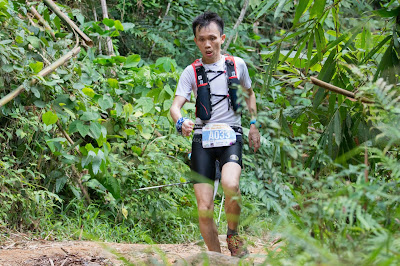 The face says it all. I am not really enjoying myself.

Quickly took in some crackers and deposited my head torch back into my drop bag before continuing on my second loop. Was already struggling and things doesn't look too good as I slowly walked up the first stretch as the cement pavement despite the break of dawn was still slippery. I was already on survival mode and it was still 4 more loops to go to meet the minimum requirements. But the most important thing was that I am still positive and was still pushing on, hoping to meet 6 loops which was the same distance I did the past 2 editions. 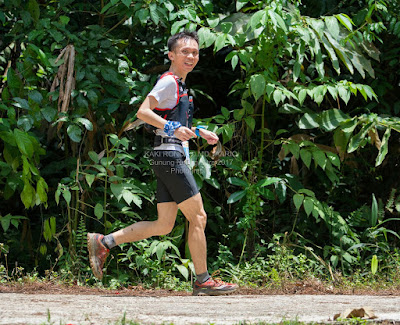 Got "snipe" by a Taariq who was hiding behind the bushes.

Nothing dramatic except for the dip in strength and energy for my second and third loop before I decided to stop for my lunch break. Was hungry and was hoping the food will help me regain some strength as I rested my legs. And while doing so, I took the opportunity to remove and shoes and socks to check out on the burning sensation I was experiencing on my right heel. And to my horror, my Drymax socks has begun to tear there. I didn't blame the socks though as it was foolish of me to choose this pair as it had already served me close to 1,000KM worth of running. 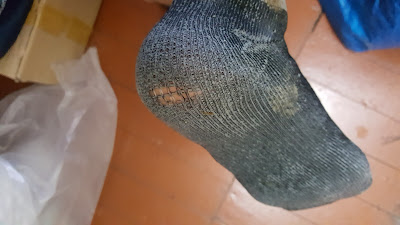 Anyway, lunch was simple fried rice and it was enough to satisfy my hunger. Readjusted my socks higher so that the hole won't be rubbing on my heel. It did the trick for a while as I went on for my fourth loop, but the socks eventually fell back. Despite still walking (and struggling), the socks was still irritating my heel and I decided to stop by at the first hut a mile up to have it readjusted again. Then an idea struck me. To change sides and that help did the trick as my left foot was slightly larger. 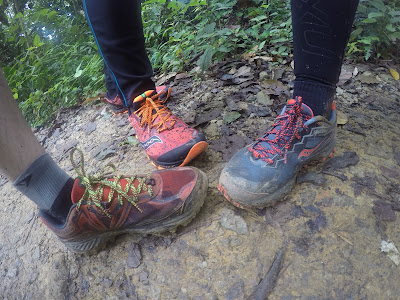 Run Anywhere with the Saucony Xodus, Nomad TR and Peregrine.

Knowing at this point of time that I will not be able to hit 6 loops, I took my time and was aiming for the huts along the way up and down. Some I passed, but some I took the opportunity to rest and that helped me complete my fourth loop without much hassle and also blister free on my heel.

The start of my fifth loop was a mentally challenging one. I wanted to get it over with as quickly as possible but my tired body was hesitating. But after a couple of ice popsicle, I began my journey and eventually caught up with Kim Song and Amanda. Kim Song was struggling with some cramps as I told him to use my strategy of aiming for the huts along the way an opportunity to rest a little before continuing on. We both then arrived at the hut a mile from the bottom and rested a while there while I check on my heel which was relatively still blister free. Phew... 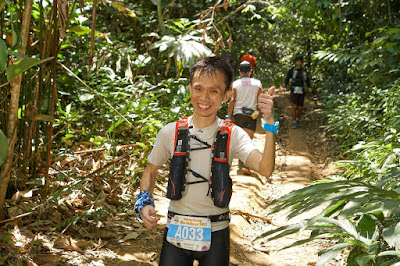 Feeling pump for my final descent.

After a pretty lengthy rest, I resumed on my journey upwards, feeling a little pumped up now. No I didn't run, but I did feel that I was walking faster, well a little. I took a little breather at the next hut to wait up with Kim Song and Amanda. However, the wait was longer than I expected and that they both did not arrive, and at that point of time, I guess Kim Song has made the call to turn back down.

I continued on running when I can, and walk when I couldn't. That gave me the extra push to arrive at Lolo for the fifth time. And at this time, I found out that they were quickly running out of water here which I relatively told myself that there won't a be sixth for me then. And with that, I started my journey down for one final time which I was really glad. And being glad will mean that I am going faster too!

As I made my journey down, I was reminding the others that they were quickly running out of water at the u-turn point. Some was shocked to hear that while some others did not bother. I gave away my water to one of the runners too as I won't bee needing much of it. With the last mile to go, I was still reminding others to fill up the hut there before making their way up and eventually caught up with Hazel who is on her way down. And from here onwards, I walked with her while chatting away till we both arrived at the bottom completing my fifth loop in 9:08:47 hours. 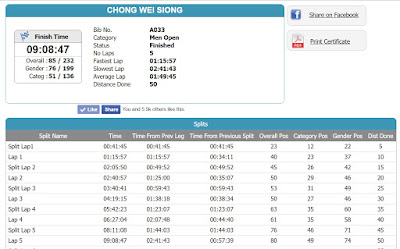 Looking at my time, I could have gone for my sixth loop and finishing it just in time before the 12 hour cut-off. However, I have made up m mind at that time that I will stop at my fifth and be realistic with my current fitness level. To continue will be a struggle to my body and a higher risk of injury. Besides, the u-turn point at Lolo has probably ran out of water too. So yeah, overall I am satisfied with my third edition. Despite much slower than my previous two, I had to be realistic and to accept that I am coming back from square one and that I have been extremely busy with the new business venture. To complete the minimum five loops is already an achievement for me and it will also be a good training run for me. 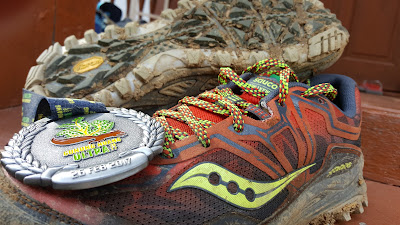 All in a day's work.

Took time to refuel the body from what is left over of the food. Oranges, bananas and some vermicelli and that was good enough for the craving body. Wai Hong was kind enough to offer me a place to shower at his room as I quickly cleaned myself up before leaving Gunung Nuang for a long drive home.

And once again, many thanks to the organising committee and volunteers for another enjoyable edition of the Gunung Nuang Ultra. But honestly, I didn't enjoy myself too much this year due to lack of fitness. But despite clocking my worst this year round, I am already waiting for next year's edition! Yeah yeah.. I am looking for trouble. :p

* Photos here credited to the respective photographers. Thank you.
Posted by Frank Chong at 7:17 PM