"I run not because I am a runner. I run because I love to run."

The West Highland Way, a 95 Miles (152KM) scenic but yet rugged highland trekking route across the mountains of Scotland from Milngavie to Fort William. The race, a to do on my bucket list, this is my long one. And being my 10 year of running, this race came in time as I close off an amazing chapter to my running career. No, am not retiring but it’s just that I will be done with the distance that I would like to accomplish, that’s if I can complete this. And from there, I would really like to take a step back and just enjoy my runs.

I always wanted to do a 100 Miler (160KM). Having successfully tackled that distance on the road at Craze Ultra 2014, I wanted to run that distance on the trails next. I started studying the events around the world for one shot at it. However, due to time and financial constraints, it makes things a little difficult. But the main issue was that most races of this distance requires some sort of qualification or to accumulate points and also subject to ballot.

Then almost a couple of months later at the same year after completing Craze Ultra 2014, I traveled to Scotland to write my memoirs, a moment in time when I crashed. Though I didn’t travel much back then, I was introduced to the West Highland Way and did some homework on it. Yes, it may be 5 Miles short of 100 Miles, but the challenge of it caught my attention and instantly, I knew that I had to run this when I can, especially having receive a "not so favourable" medical report. I really need to do this fast when my body is still able to take the punishment. And with the decision made, no longer I have thought of other 100 Miles races anymore. This, I had to do for not only the challenge, but also knowing that Scotland is part of me. 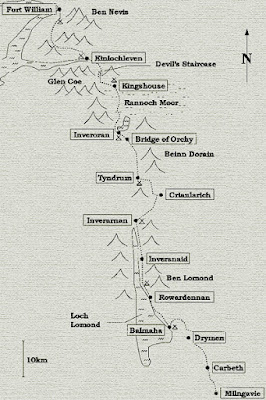 However, there was one problem. Not just anyone can enter this race by just registering away. One needs to qualify for it with some background in at least 100KM of trail running and that just a little of luck due to the fact that participants are selected based on a ballot system as only about 230 runners are allowed to run in this race. With Vibram Hong Kong 100KM 2015 still “freshly” ran by my legs, I’ve used that and also the Vietnam Mountain Marathon 2015 as my qualifiers. And way before registration was open, I’ve started looking for my support crew, taking me back to October 2015 when I first spoke to Angela about this. And through her, I met Ian Beattie, the race director at Belter's Bar during the Jedburgh Three Peaks Ultra post race party and spoke to him. 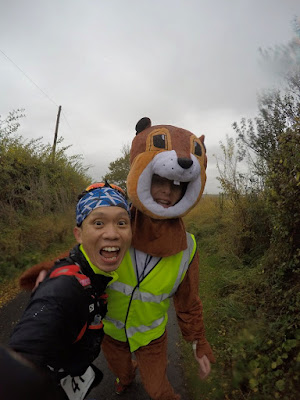 Little did I know back then at Jedburgh Three Peak's Ultra 2015, that this "squirrel" is actually the Race Director of the West Highland Way Race and also the chairman to Scottish Athletics.

The opportunity came for me to visit part of the West Highland Way came in October 2015 when I paid a visit to Tyndrum, located along the highlands at somewhere near the halfway point. The owner of the hostel I was staying at, By The Way was Kirsty and she her own self is an avid trail runner who has been training around the area. She has given me some pretty good advice and recommended that I run part of it from Glencoe to Bridge of Orchy and back Tyndrum, a good 26KM or so. And with the guidance of Ian Minty, a stranger turned close friend I met at By The Way who had continue to advise me as the race approaches which I’m really appreciative of, I ran it! And with the first hands on or rather legs on experience, it has reassured me that this was the final race I need to do to complete my running career. 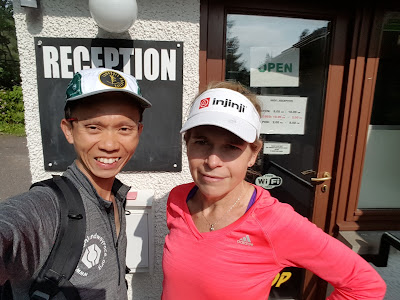 With Kirsty at By The Way, Tyndrum. 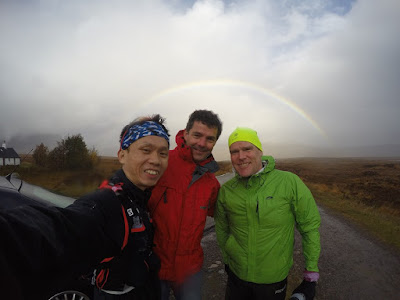 With Ian and Ian Minty (in green) at Glencoe in October 2015.

I continued with my training not knowing if I will be selected for the race. Then came December 2015 when the ballot was announced. I was asleep when it did due to the time zone difference and when I woke up, I’ve received messaged from Angela and Ian Minty mentioning “The Long One”. I was selected! And within a few good minutes of waking up, I was registered! I was in! I am going for an adventure of a lifetime! And with that, I confirmed Angela as part of my crew and also Chee Kong as well.

With the confirmation, I pushed hard and smart for it with a training plan combined together with Comrades which is based on Dr. Phil Maffetone's MAF (Maximum Aerobic Function) method and LCHF (Low Carbs High Fat) diet. Reducing my intake of dairy and sugary product helps a lot too. The usual road training was done and visits to the trails with the help of some friends like Yan Leng, Piew and Choon Yuen helped. Shoes from the Kinvaras to the Peregrines and Nomad TR were fully utilised and race gears not only provided by Saucony Malaysia but also friends from the UK and South Africa divisions too, which I am really lost for words for. Many thanks guys! 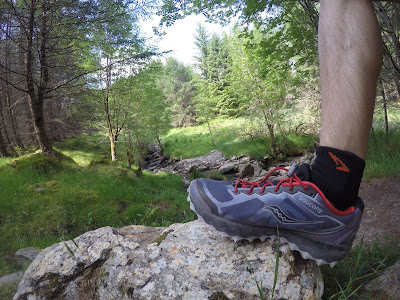 Race shoe of choice for the West Highland Way Race, the Saucony Peregrine 6.

Training wasn’t easy due to work commitments and the handover process. But with some sacrifices from myself and family including my dear Bailey the Westie, everything went pretty smoothly. Yes there were rough patches, but there were tackled successfully and soon was forgotten. However, there will be an unforgotten one as throughout the journey, I lost some friends and patients to cancer which made my days gloomy. As I run, I will have them in my thoughts, as this run will be dedicated to them and those affected with this disease.

With a month to go, Edmund has also confirmed his part as my crew and also Alexa coming forward to give a helping hand. As the race approaches day by day, more homework was done including the food and drinks I would like to have at the checkpoints, the logistics and accommodation not only for myself but crew members too and also my estimated running pace. However, I was deeply disappointed that a dear friend couldn’t make it, someone who will help make a huge difference to the team and my race. 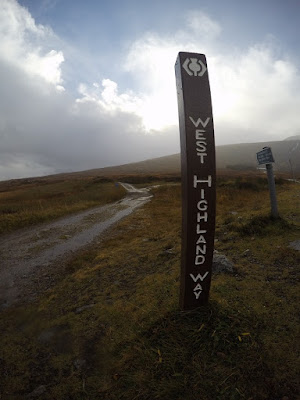 Comrades Marathon 2016 came and it was dusted with a new personal best despite holding back to care for the legs and to minimise injuries risk. It was done as part of training and my last long run before the West Highland Way Race and the results were certainly positive. Felt good and was glad the legs wasn’t badly thrashed at the “down” run and within a couple of days later upon arriving at Aberdeen, I was back running again despite only short distances. I covered lots of walking between Chee Kong’s house to town daily at about 10KM out and back and this allowed the legs to keep moving. 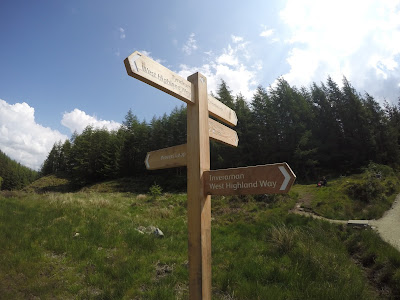 A week later, I was back at Tyndrum to do a little recce and also training there as it was located somewhere at the halfway point of the race. Covered a pretty huge amount of ground there touring Auchtertyre, Strathfillan, Clianlarich, Bridge of Orchy and Ben Lui (off course) on low intensity to keep the cardio going. Everything was good albeit the weather being rather hot. Hope it will cool down as race day approaches. And from there, it was back to Glasgow for a short meet up with Angela and to Aberdeen for a week of rest and recovery before heading back to Glasgow for race day. 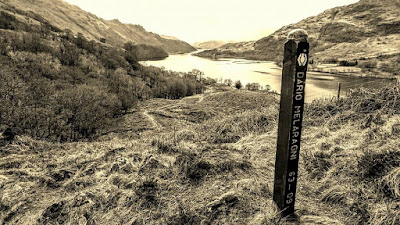 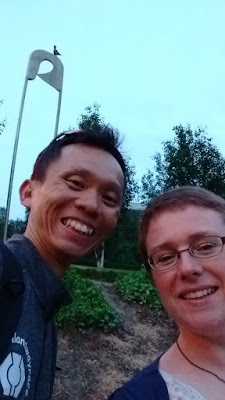 Angela, a dear Scottish friend who had been welcoming me back to Scotland everytime.

With my dream to do this, I told myself that I do not need the UTMB, UTMF, UTHK, H1, Leaville or any others. All I need to do is to touch that blue door at Lochaber Leisure Centre, Fort William and go through it to tap the card on my lanyard at the reception before 12.00PM of 19 June 2016. And hopefully if I can do just that, it will be my dream come true!

So with the West Highland Way Race just only 2 more sleeps away, I guess all the work is finally done. With a total of 1,925KM covered by the legs including Comrades in the bag and some final touches being done here at Scotland, all I can say and assure my crew is that I am ready. To Angela, Alexa, Chee Kong and Edmund, THANK YOU for agreeing to crew for me. It's going to hurt as I know that I sign up for this knowing it's not a walk in the park. I may not be fast. I may not be an able body athlete. I may not be the strongest. But I can assure all of you and promise that I will try my very best and dig the very deepest out of me to complete the West Highland Way Race in the shortest possible time I can achieve.

18 June 2016. 1AM Scottish time or 8AM Malaysian time. I will set off together with 201 other runners from Milngavie to the Scottish highlands to #FindMyStrong and to fulfill a dream while taking on the mighty Drymen, Balmaha, Rowardennan, Inversnaid, Beinglas Farm, Auchtertyre, Bridge of Orchy, Glencoe, Devil Staircase, Kinlochleven, Lundavra and many others more through a total ascent of 4096M and 4130M of descent before finishing it at Fort William. So here’s to a decade of running and thank you to everyone who had supported, blessed and inspired me all these while on my journey to the start line. Like all Scottish, AYE! 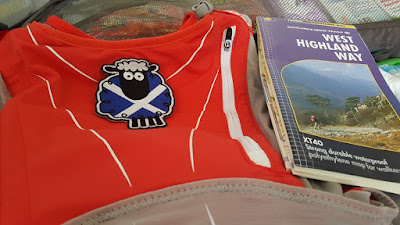 Best of luck, Frank. You'll get through this. We're all cheering you on from back home!